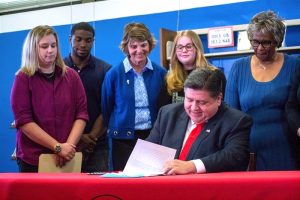 SPRINGFIELD – Gov. J.B. Pritzker signed a package of bills Wednesday, April 27 aimed at easing the state’s shortage of teachers and other education professionals, even as a new report shows Illinois just added a record number of new teachers to its ranks.

Speaking in the library of Springfield High School just blocks from the Capitol, Pritzker said that while the education workforce picture is improving, more work still needs to be done.

“In Illinois, schools still have more than 2,100 unfilled teaching positions statewide,” he said. “That includes 15 unfilled teaching slots here in Springfield and 64 in Decatur, with similar need for paraprofessional positions. With new tools though, and new funding at their disposal, districts all across the state are working to find new ways to bring people into this profession and to encourage them to stay there.”

Pritzker signed four bills Wednesday, including House Bill 4246, which lowers the cost of renewing a lapsed educator license to $50 instead of $500; House Bill 4798, allowing currently enrolled teaching students with at least 90 credit hours to be licensed as substitute teachers; Senate Bill 3988, lowering the minimum age to become a paraprofessional in grades eight or below to 18 instead of 19; and Senate Bill 3907, allowing short-term substitute teachers to teach up to 15 consecutive days in a classroom instead of just five.

Those bills come on top of numerous other measures the state has taken in recent years to lure more people into the teaching profession.

Pritzker noted that the budget bill he signed into law April 19 increases funding for minority teacher scholarships to $4.2 million. And starting next year, the minimum annual salary for first-year teachers will increase to $40,000 due to a bill he signed in 2019.

“That law, combined with proper funding and all the work to remove barriers for qualified people to enter this profession, is increasing the ranks of teachers across our state even now,” Pritzker said.

According to a new report from the Illinois State Board of Education, those efforts appear to be having an impact.

ISBE’s most recent Unfilled Positions Survey, released April 21, shows Illinois schools hired a record 5,676 new teachers in the fall of 2021, the most ever recorded in a single year and more than in the past five years combined. That was enough to lower the statewide vacancy rate to just 1.5 percent.

“Our low-income, bilingual and special education students have the least access to the teachers they need to grow and thrive,” State Superintendent Carmen Ayala said at the news conference. “We also have a severe shortage of substitute teachers, as was noted, and need an additional 2,400 paraprofessionals to fully meet our students’ needs in the classrooms.”

A survey conducted in 2021 by the Illinois Association of Regional Superintendents of Schools found 88 percent of local school districts believed they had a teacher shortage problem while 96 percent reported problems finding enough substitute teachers.