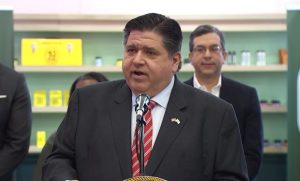 Gov. J.B. Pritzker speaks at a news conference Wednesday, Dec. 7 in Chicago regarding the state’s rollout of legalized recreational marijuana. On Dec. 6, he signed an amendment to the SAFE-T Act criminal justice reform into law. (Credit: Illinois.gov)

SPRINGFIELD – Gov. J.B. Pritzker on Tuesday, Dec. 6 signed a follow-up measure to the SAFE-T Act criminal justice reform, the third such amendment since the law’s initial passage in January 2021.

The changes approved by lawmakers last week in the fall veto session center on the law’s provisions which will end the use of cash bail beginning in January.

The cash bail system, which in most cases allows offenders to post a dollar amount to be released from custody pretrial, will be replaced by one in which a judge weighs the individual’s risk to the community and potential for fleeing prosecution in determining whether pretrial release will be revoked.

Its opponents have argued that the list of circumstances in which pretrial detention is specifically allowed is too limiting for judges.

Advocates, however, say that a presumption of pretrial release included in the law for lesser, nonviolent offenses will allow the courts to give more thorough hearings to those whose freedom is on the line prior to conviction.

“I’m pleased that the General Assembly has passed clarifications that uphold the principle we fought to protect: to bring an end to a system where wealthy violent offenders can buy their way out of jail, while less fortunate nonviolent offenders wait in jail for trial,” Gov. JB Pritzker said in a statement. “Advocates and lawmakers came together and put in hours of work to strengthen and clarify this law, uphold our commitment to equity, and keep people safe.”

In many cases, the changes were more substantial than “clarifications,” as the measure, contained in House Bill 1095, expanded the list of offenses in which a judge can deny pretrial release. The change made it so all forcible felonies can lead to pretrial detention regardless of whether the defendant would be eligible for probation if a judge deems them a danger to the community.

It also specified that the changes take effect for those charged after Dec. 31, 2022, but those on the old bail system can petition the court to be placed into the new cash-free system on staggered timelines depending on the severity of their charges.

Members of House and Senate working groups worked for months on the changes with state’s attorney and law enforcement groups, but Republicans said during floor debate that they were not included in the process.

Many concerns cited by opponents in the recent election season were addressed, however.

For example, the follow-up bill specifies that police maintain the authority to arrest trespassers.

While it maintains language instructing officers to issue a citation in lieu of custodial arrest for cases below Class A misdemeanors, it also specifies that police maintain discretion to make an arrest if the person is a threat to the community or they continue to break the law.

“We understand that public safety is not a static issue,” House Deputy Majority Leader Jehan Gordon-Booth, D-Peoria, said in a statement. “This legislation strengthens the underlying SAFE-T Act with valuable feedback from survivors, law enforcement, prosecutors and other public safety advocates. If we want to make our communities safer, we have to work together. This update is a step in the right direction.”

The measure clarifies judicial authority to revoke pretrial release if the defendant violates electronic monitoring conditions and specifically states penalties may be imposed for intentional tampering with monitoring devices.

The SAFE-T Act specifies that defendants have a right to a public defender from their first appearance in court, a change that is expected to increase justice system workloads. The measure creates a grant program to aid public defenders with increased caseloads, but allocation of funding for the program would be up to future General Assemblies.

Asked at an unrelated news conference Wednesday how he would gauge the effectiveness of the bill once it takes effect, Pritzker said he’d be looking to the Illinois Supreme Court and state’s attorneys to outline unforeseen challenges.

“As with all laws, we’re always going to be looking to see what’s working really well and what things are maybe less so and who it is that’s coming forward and saying, ‘this is problematic,’” he said. “The most important thing is we’re trying to make our neighborhoods and our communities safer all across the state of Illinois. This law and these amendments are designed to do just that.”