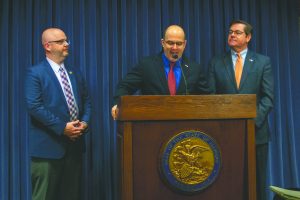 Rep. Mark Batinick, a Plainfield Republican, speaks at news conference April 2 at the Capitol in Springfield. He is joined by Rep. Jeff Keicher (left), a Sycamore Republican, and Rep. Grant Wehrli, a Naperville Republican. Batinick warned during a May floor debate that financial provisions in the bill regulating the closure of coal ash pits might cause companies to go bankrupt and be unable to pay for safe removal. The bill was signed into law Tuesday by Gov. J.B. Pritzker. (Photo by Jerry Nowicki/Capitol News Illinois)

Coal ash is the byproduct left behind when coal is burned to produce power, and it contains harmful heavy metals such as mercury and arsenic which can seep into groundwater. In many cases, coal ash is placed in unlined pits, where it remains long after the power plants are closed.

Senate Bill 9 requires a coal ash impoundment owner to submit to the Illinois Environmental Protection Agency a “closure alternatives analysis” addressing several closure scenarios and options laid out in the legislation. It would give the EPA the authority to choose the safest plan for coal ash remediation.

It also creates initial fees of $50,000 for each closed coal ash plant and $75,000 for those that have not yet been closed. Owners of operational impoundments would then pay an annual fee of $25,000, and a $15,000 fee would be charged for closed plants that had not yet completed “post-closure care.”

The fees would be paid into the Environmental Protection Permit and Inspection Fund to be used for regulation purposes.

“Coal ash is a public health issue and a pollution issue, and the state of Illinois is taking action to keep communities safe,” Pritzker said in a statement Tuesday. “This new law will protect our precious groundwater and rivers from toxic chemicals that can harm our residents. With the Trump administration loosening standards on coal ash, Illinois is raising the bar to protect our environment and the health of people across our state.” 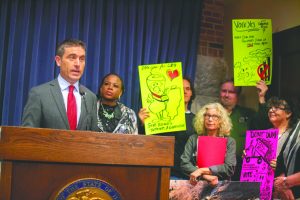 Rep. Mike Marron, R-Fithian, and Rep. Carol Ammons, D-Urbana, are joined by advocates at a news event May 21 at the Capitol in Springfield as they speak in favor of Senate Bill 9, which aims to ensure safe closure of toxic coal ash pits and financial protections for taxpayers should the pits cause environmental disasters. The bill passed the General Assembly and was signed into law Tuesday by Gov. J.B. Pritzker. (Photo by Jerry Nowicki/Capitol News Illinois)

If any company is forced to forfeit bond proceeds to the state, the money would go into a newly-created Coal Combustion Residual Surface Impoundment Financial Assurance Fund to be used for appropriate closure or remediation purposes.

Senate Bill 9 also prohibits coal ash discharge into the environment and directs the IEPA to propose new rules to the Pollution Control Board governing the regulation of coal ash, including permit application requirements and what the threshold for “complete removal” is.

While advocates said the bill was a significant step forward for clean air and water, opponents including the Illinois Chamber of Commerce said changes were needed to the bill moving forward.

Rep. Mark Batinick, a Plainfield Republican, warned during a May floor debate that financial provisions in the bill might cause companies to go bankrupt and be unable to pay for safe coal ash removal.

“These are difficult situations where we’re trying to make decisions to protect the citizens from bad groundwater, but this issue is we’re trying to force these companies to pay for the cleanup, but if we force it in too much of an onerous way, they may just go belly up, go bankrupt and leave the state and we’ll be on the hook,” he said.

Todd Maisch, president of the Illinois Chamber of Commerce, said in a statement Tuesday he has concerns the new law will “impede the state’s ability to address the cleanup of coal ash ponds in Illinois.”

The Chamber said the bill should allow a coal ash owner to purchase insurance to cover its financial assurance obligations along with the other types of allowable bonding.

The Chamber also raised concerns that the bill prohibits taking certain actions without a permit, which “could put employers in immediate noncompliance” for continuing to operate their facilities while the regulatory program is adopted and permits granted.

The bill could also make owners liable for pollution not related to their coal ash surface impoundments, the Chamber said.

“Senate Bill 9 … includes technical flaws that could delay cleaning up these ponds by complicating cleanup actions and creating a moratorium on cleanup activity. These issues must be addressed before the state program can provide meaningful environmental benefit,” Maisch said.