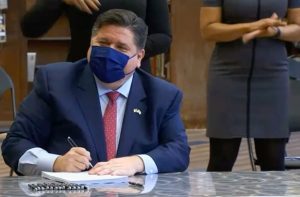 SPRINGFIELD — Gov. J.B. Pritzker joined members of the Illinois Legislative Black Caucus on Monday, March 8 to sign a measure aimed at advancing equity in education in the state.

House Bill 2170, known as the Education and Workforce Equity Act, contains over 20 provisions aimed at decreasing racial gaps in opportunity and attainment that currently persist in the state’s education system. The legislation is the second major omnibus bill backed by the Black Caucus that Pritzker has signed this year.

“The entire Illinois Legislative Black Caucus and the many advocates engaged in shaping a better world for our youngest residents… our work isn’t done until equity and fairness is a guiding principle at all of our schools,” Pritzker said during the signing. “The Education and Workforce Equity Act amplifies our common priorities in delivering high quality learning from cradle to career.”

Lightford, who sponsored the legislation, led the Black Caucus through the development of their four-pillar legislative agenda and their successful passage of multiple omnibus bills during the January lame duck session.

During her speech, she cried while reflecting on her tenure.

“Almost a year ago, I stood at a microphone at an event very much like this one. I talked about my own trauma, as a Black single mother, because I wanted people to know that the desperation with raising a Black child in our society is common,” she said. “We have 23 provisions in this act, 23, that will change the way a child goes from preschool all the way through higher education.”

For early education, HB 2170 will require the Illinois State Board of Education to conduct an annual assessment of all public school students entering kindergarten and expands the Early Intervention Program for 3-year-olds who were previously cut out of the program if they had a birthday between May and August.

Most of the bill’s provisions are targeted at K-12 education. HB 2170 adds new graduation requirements for schools in line with what’s necessary for entry at state universities.

The bill also expands social studies to include more mandatory coursework on Black people and Black Americans, from the pre-enslavement of Africans, to the American slave trade, to the American Civil Rights renaissance.

In line with other recent legislation pushed by the Black Caucus to make the state more responsive to the mental health needs of residents in crisis, HB 2170 establishes the unpaid Whole Child Task Force to expand school services for students suffering from trauma.

On higher education, the bill reduces the contribution schools must make to a grant program aimed at keeping high-performing students in the state in an effort to target income-based opportunity gaps.

“Much has been accomplished here but there is still a great deal of work to do,” Pritzker said. “There is no investment more important to the future of our state than in our students.”