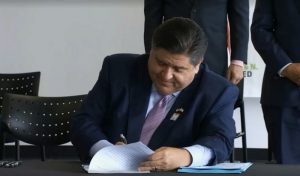 SPRINGFIELD – Gov. J.B. Pritzker signed a bill into law Tuesday, July 27 that repeals criminal penalties for people who transmit HIV to others.

House Bill 1063, by Rep. Carol Ammons, D-Urbana, and Sen. Robert Peters, D-Chicago, deletes language adopted in Illinois and many other states during the early days of the HIV epidemic that made it a felony for an individual to engage in certain activities such as unprotected sex, donating blood or tissue or sharing nonsterile intravenous needles knowing that he or she was infected with HIV.

“Research has shown these laws … don’t decrease infection rates, but they do increase stigma,” Pritzker said. “It’s high time that we treat HIV as we do other treatable transmissible diseases, thereby treating our residents with dignity and furthering our mission to end this epidemic in Illinois.”

At a bill signing ceremony in Chicago, Pritzker said the legislation is one more step his administration is taking to ensure equal rights for members of the LGBTQ community.

Other steps have included providing financial aid to transgender students who otherwise would not qualify for federal aid, requiring curriculum in public schools that includes contributions of the LGBTQ community, and expanding Medicaid to cover gender-affirming surgery.

Pritzker was joined at the ceremony by Lt. Gov. Juliana Stratton, Democratic leaders in the General Assembly who helped pass the bill, the AIDS Foundation of Chicago and other LGBTQ rights activists.

Peters noted that the law in Illinois did not require that a person actually transmit HIV to be convicted of the crime, only that they engaged in activity that could have exposed another person to the virus.

“Too often, when faced with a challenge in society, we seek the hammer of criminalization,” Peters said. “When we faced the challenge of HIV, our country reacted out of fear, prejudice and hate, and with that brought down a violent and horrendous hammer. In turn, this caused more fear, pain and trauma for people living with HIV. It did nothing to bring safety or treatment or public health to our world.”

The bill decriminalizing HIV was one of four bills Pritzker signed July 27 that were supported by advocates for LGBTQ rights.

“For decades, our state insurance law discriminated against countless Illinoisans looking to welcome a child into their family, putting parenthood financially out of reach for same-sex couples, single women and others,” Croke said in a statement. “Setting things right and creating a more inclusive insurance law was long overdue.”