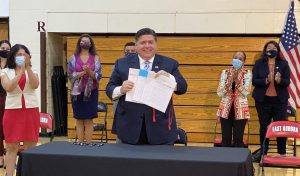 SPRINGFIELD – Gov. J.B. Pritzker signed four bills into law Aug. 2 aimed at protecting the state’s immigrant and refugee populations, saying they will help make Illinois “the most welcoming state in the United States” for immigrants.

Among those are a requirement for local governments to end partnerships with U.S. Immigration and Customs Enforcement, a law making a person’s citizenship or immigration status a potential motivation for a hate crime, and protections from workplace discrimination based on a person’s work authorization status.

Speaking at a bill-signing ceremony at East Aurora High School, Pritzker said the measures were in keeping with actions his administration has been taking since its beginning to expand opportunities and protections for noncitizens in Illinois — actions that have included extending eligibility for Medicaid and state-based student financial aid for noncitizens regardless of their documentation status.

“I think many of you know that throughout my governorship, I’ve directed my administration to adopt policies that make Illinois a welcoming state for immigrants, and I’m very proud to sign these accountability measures into law to advance our cause,” Pritzker said.

The bills were all part of a package of legislation pushed by the Legislative Latino Caucus, many members of which attended the bill-signing, along with immigration rights advocates. Many in attendance said the measures still don’t go far enough, and called on the federal government to enact more comprehensive immigration reform.

“The only way to ensure safety for all immigrants is citizenship for all immigrants, ending detention, deportation, and ultimately abolishing ICE,” said Hwangchan Yu, a community organizer for the HANA Center, an advocacy group for Korean American and multi-ethnic communities in Chicago.

Senate Bill 667, dubbed the Illinois Way Forward Act, prohibits both the state and local governments from signing or renewing contracts with the federal government to detain immigrants. It also prohibits law enforcement from asking about or investigating the immigration or citizenship status of a person being held in custody. It was sponsored by Sen. Omar Aquino, D-Chicago, and Rep. Elizabeth Hernandez, D-Cicero.

Senate Bill 1596 enhances penalties for certain crimes by classifying them as hate crimes if they were motivated, even in part, by the victim’s actual or perceived immigration or citizenship status. Other categories protected under the state’s hate crime law include race, color, creed, religion, ancestry, gender, sexual orientation, physical or mental disability and national origin.

That bill was sponsored by Jacqueline Collins and Rep. Theresa Mah, both Chicago Democrats. It takes effect Jan. 1.

House Bill 121, by Chicago Democrats Rep. Will Guzzardi and Sen. Ram Villivalam, is aimed at protecting people covered by the Deferred Action for Childhood Arrival program, or DACA. It prohibits work employment discrimination based on a person’s work authorization status, defined as “the status of a person born outside the United States, and not a U.S. citizen, who is authorized by the federal government to work in the United States.”

And finally, Pritzker signed Senate Bill 2665, by Sen. Celina Villanueva and Rep. Aaron Ortiz, both Chicago Democrats, establishing an Illinois Immigration Impact Task Force to examine issues involving immigrant communities in the state and to report its findings and recommendations to the General Assembly by May 31, 2022.

In addition to those bills, Pritzker also signed an executive order establishing a Welcoming Illinois Office within the governor’s office to develop and coordinate policies to make Illinois a more welcoming and equitable state for immigrants and refugees.

So far, Pritzker has signed 232 bills from the spring 2021 session into law. Another 434 bills are awaiting action.