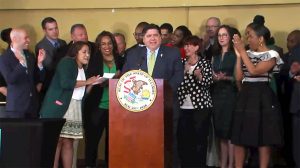 Gov. J.B. Pritzker speaks before signing a bill legalizing adult use of recreational marijuana in Illinois during a ceremony Tuesday at the Sankofa Cultural Arts and Business Center in Chicago. (Credit: BlueRoomStream)

SPRINGFIELD – Recreational marijuana use and possession will be legal in Illinois beginning Jan. 1, 2020, after Democratic Gov. J.B. Pritzker on Tuesday in Chicago signed a bill supporters said is the “most equity-centric” legalization effort in the nation.

“This legislation lives true to the promise to bring justice, equity and opportunity throughout our state,” Lt. Gov. Juliana Stratton said. “By including components focused on repairing the harm caused by the failed war on drugs and decades of policies that caused mass incarceration — Illinois is a national leader with policy that’s a national model.”

The legalization effort made Illinois the 11th state in the U.S. to legalize marijuana but the first to pass a comprehensive legalization package through the legislature rather than a ballot initiative.

“As the first state in the nation to fully legalize adult-use cannabis through the legislative process, Illinois exemplifies the best of democracy: a bipartisan and deep commitment to better the lives of all of our people,” Pritzker said during a signing ceremony at the Sankofa Cultural Arts and Business Center. “Legalizing adult-use cannabis brings an important and overdue change to our state, and it’s the right thing to do.”

Beginning January 1, the law will allow for the possession of up to 30 grams of marijuana per Illinois resident over the age of 21. Residents will also be able to possess up to five grams of cannabis concentrate and 500 milligrams of tetrahydrocannabinol – or THC – contained in a cannabis-infused product. Non-residents can possess half those amounts.

Registered medical marijuana patients will be allowed to grow up to five cannabis plants in their home and possess more than 30 grams of marijuana if it is grown and secured in their residence.

The new law also includes expungement measures for those with low-level marijuana arrests and convictions. Roughly 700,000 records are eligible for expungement under the Cannabis Regulation and Tax Act, Pritzker said.

“One of the things that we wanted to make sure we accomplished with legalization was ensuring we put social equity at the center and the heart of our efforts, acknowledging that while we normalize and legalize something that is happening across the country, that we tie the direct nexus to the communities that the prohibition has hurt the most,” said state Sen. Toi Hutchinson, D-Olympia Fields.

Those convicted of possessing between 30 and 500 grams could petition the courts for expungement through a more complex “motion to vacate” process.

Marijuana offenses connected to violent crime are ineligible for the automatic expungement processes, but the individual or state’s attorney can still file a motion with the court to vacate conviction.

“This legislation recognizes that to move forward and create a new cannabis industry, we have to mend the historic inequalities that have torn communities apart,” said Esther Franco-Payne, executive director of Cabrini Green Legal Aid. “Expunging the records of hundreds of thousands of people and making social equity at the center of this bill will change lives and revitalize communities.”

The measure directs 25 percent of legalization revenues to a newly-established Restore, Reinvest and Renew grant program to “help communities most disproportionately impacted by the war on drugs,” Pritzker said.

The bill also creates a $30 million low-interest loan program to defray the start-up costs associated with entering the licensed cannabis industry and establishes a “social equity applicant” status for licensing aimed at generating more minority participation in the legalized industry.

Legalization will generate revenue through a 7 percent tax on the gross receipts from the sale of marijuana by a cultivator and an excise tax on the purchaser. Marijuana with a THC level at or below 35 percent would pay a 10 percent tax; while products over that amount of THC would be taxed at 25 percent. A 20 percent tax would apply to marijuana-infused products.

The tax does not apply for marijuana purchased by licensed medicinal patients.

Legalization is expected to generate as much as $500 million each year when the industry is fully mature. For the first year, most of the revenue is expected to come from licensing fees for marijuana cultivators, processors, transporters and sellers.

After regulatory expenses are accounted for, the bill dedicates 35 percent of legalization revenues to the general revenue fund; 20 percent to address substance abuse, prevention and mental health concerns; 10 percent to pay down the bill backlog; 8 percent to local governments to support crime prevention programs and interdiction efforts relating to the illegal cannabis market and driving under the influence of cannabis; and 2 percent for a public education campaign and analysis of the public health impacts of legalization.

SPRINGFIELD – While marijuana consumption and possession will become legal for Illinois residents over 21 years of age starting Jan. 1, 2020, consumption in public places will still be prohibited and local governments will maintain control as to whether the industry can conduct business within their jurisdictions.

Democratic Gov. J.B. Pritzker signed House Bill 1438 into law Tuesday, making Illinois the first state in the U.S. to legalize adult-use marijuana consumption and sales through the legislature rather than by ballot initiative. The legislative process allowed lawmakers to craft a comprehensive 610-page regulatory bill with bipartisan support.

Consumption is allowed at a private residence but prohibited in any public place and in the proximity of a person under 21 years of age who is not a licensed medical patient. Landlords can prohibit marijuana use on their premises as well.

Anyone operating a car, boat or plane is prohibited from consuming marijuana, although possession is permissible in a motor vehicle if the marijuana product is placed in a “secured, sealed container and reasonably inaccessible while the vehicle is moving.”

Consumption and possession are prohibited at corrections facilities and on school grounds unless for licensed medical use. Consumption by a school bus driver, police officer, firefighter or corrections officer is also prohibited while they are on duty, and is not allowed at any residence that serves as a child care facility.

Local governments maintain authority under the new law as well, but they cannot ban individual possession of marijuana or marijuana products. A unit of government may, however, prohibit or significantly limit a cannabis business establishment’s location within its jurisdiction.

“Locals get to determine where these facilities exist in their communities,” said Rep. Kelly Cassidy, a Chicago Democrat and the bill’s House sponsor.

Local governments can decide if the on-premises consumption of marijuana is allowed at marijuana-related business establishments within their jurisdiction, as the new law allows local governments to exempt these facilities from limitations in the Smoke Free Illinois Act.

Despite local control, the law requires at least 1,500 feet between each retail dispensary.

Colleges and universities may continue to prohibit marijuana use on campus in accordance with federal regulations, and any business may prohibit use on private property.

Only licensed medicinal patients will be able to grow up to five cannabis plants in their own homes, unless the property is rented, in which case they would need written consent from the property owner.

The new law also allows employers to continue to maintain drug-free workplaces and zero-tolerance drug-use policies provided they are non-discriminatory. Employers will also maintain the right to discipline or fire an employee for violating workplace drug policies.