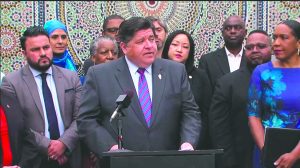 Gov. J.B. Pritzker stands with lawmakers and advocates during a signing event Thursday, June 20 in Chicago for an executive order aimed at increasing participation in the 2020 U.S. Census. (Credit: BlueRoomStream)

SPRINGFIELD — Gov. J.B. Pritzker joined a diverse coalition of lawmakers and advocates in Chicago on Thursday, June 20 as he signed an executive order aimed at ensuring an accurate count in the 2020 U.S. Census.

“The stakes could not be higher, and to be frank, we are behind in Illinois,” Pritzker said, noting that Illinois could lose up to two congressional seats if residents are undercounted.

Lieutenant Governor Juliana Stratton said the stakes include billions of dollars in federal funding, as Illinois could lose $120 million annually for each 1 percent of the population that is undercounted – about $1.2 billion over the 10-year period between each census.

“The census is about equity and representation and how much money for critical services is distributed to communities in need,” she said.

Pritzker said the order, combined with a $29 million state appropriation for census outreach efforts which was included in the 2020 operating budget, would help Illinois come closer to a “complete count.”

Pritzker and the coalition of advocates at the Garfield Park Conservatory in Chicago said one of the keys to ensuring a correct count would be building trust in minority communities.

Pritzker took aim at President Donald Trump’s administration and said a citizenship question, which could appear on the 2020 census pending a decision by U.S. courts, is a tactic used by Trump to “force an undercount.”

“We will not let him win,” Pritzker said.

Omar Aquino, a state senator from Chicago and co-chair of the Illinois Legislative Latino Caucus, called Trump a “bully” and accused him of using the citizenship question and heavy-handed family separation policies and rhetoric to intimidate immigrant communities.

“We need to make sure that we are having everyone, all residents of the state of Illinois and in this country, counted no matter of their immigration status,” he said. “If you live in this state, you should be counted. You are one of us, you are our neighbor, you are family and we care for you.”

Pritzker said advocates and coalition members will work to build trust by “working with people in the communities to make sure that people feel safe when they are filling out this questionnaire.” That effort would include going door-to-door and having one-on-one meetings, he said.

“If we’re going to reach our hard-to-reach communities, we need representatives from those communities at the table,” Pritzker said.

Funds from the census appropriation will go toward outreach and education, with grant funding to community organizations that are engaged in census advocacy, particularly in hard-to-count communities. The DHS will file public reports online on a monthly basis to detail its budget, expenditures and distributions of funds to organizations throughout Illinois.

“We need to get these funds out the door as soon as possible,” Pritzker said.

Anita Banerji, leader of the Democracy Initiative of the nonprofit organization Forefront, which has focused on census outreach, said the appropriation and executive order will greatly aid the ongoing process of ensuring a correct count.

“Illinois is well positioned to conduct the most fair and accurate census count in our history,” she said. “And today, Illinois is now leading the nation’s census efforts.”