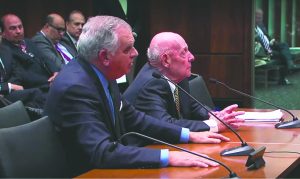 Former Republican U.S. Congressman and U.S. Transportation Secretary Ray LaHood testifies before an Illinois Senate committee April 29 in Chicago in favor of an increase to the state’s motor fuel tax. On Sept. 26, LaHood was named by Gov. J.B. Pritzker as chairman of the Abraham Lincoln Presidential Library and Museum Board of Directors. (BlueRoomStream

LaHood and four others were appointed to the board Sept. 26, and they await Senate approval as well. Pritzker’s office said the other six appointees will be announced in the coming days.

They are the first appointments to the 11-member museum board since it was established in August 2017 when the Illinois Historic Preservation Agency was abolished and most of its duties, except for those pertaining to the Lincoln Museum, were given to the Department of Natural Resources.

The appointments became particularly pressing for the governor in recent days, as his office announced last week that he fired the museum’s director since 2016, Alan Lowe. Per statute, the board “shall appoint the executive director with the advice and consent of the Senate.”

In a statement after that firing, Pritzker spokeswoman Emily Bittner said, “The administration terminated Mr. Lowe’s employment today. … We cannot comment further on personnel matters. We look forward to working with the team of museum professionals, historians and librarians at the ALPLM to ensure that the institution is meeting its high standards.”

LaHood is well-known in Illinois and has been in the news in recent weeks for touring the state and advocating for a capital infrastructure plan, which the General Assembly ended up approving. He served as transportation secretary under President Barack Obama from 2009 to 2013, and served Illinois’ 18th district in the U.S. House from 1994 to 2009. 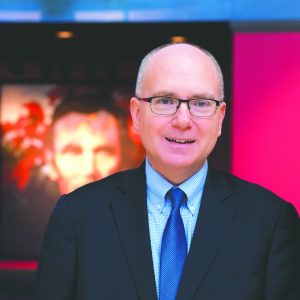 Two of those experts were covered in the Sept. 26 appointees.

Joan Brodsky, a member of the Abraham Lincoln Presidential Library Foundation, Newberry Library in Chicago, the Board of Visitors of the Syracuse University Library and the Board of Overseers of the Library of The Jewish Theological Seminary in New York City, will serve as the historic preservation expert.

Pritzker’s office said Brodsky is a lifelong librarian and the founder and sponsor of an annual endowed lecture series and workshop on book and paper conservation.

Harris has also been the head of reference for the Illinois State Library and public services librarian for the Southern Illinois University School of Medicine among several other librarian positions.

She serves on the boards of the Abraham Lincoln Association and Springfield and Central Illinois African American Arts History Museum, and is president of the Sangamon County Historical Society Board.

Other appointees are Gary Johnson, who became president of the Chicago History Museum after 28 years as a lawyer and partner in international law at Mayer Brown and Jones Day; and Eunice Santos, a professor and dean of the School of Information Sciences at the University of Illinois at Urbana-Champaign.