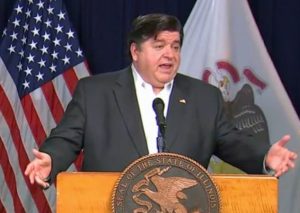 Gov. J.B. Pritzker answers a reporter’s question about Rep. Allen Skillicorn’s announcement that he is seeking to recall the governor for his handling of the state’s unemployment claims online portal. Pritzker addressed the media during his daily COVID-19 briefing Tuesday, May 26 in Chicago. (Credit: blueroomstream.com)

SPRINGFIELD — A conference call between U.S. governors and Republican President Donald Trump led to the latest in a series of spats between Illinois’ governor and the president Monday.

Trump reportedly admonished the governors for what he deemed a weak response to protests, which were sparked by the death of George Floyd, an unarmed Minneapolis man who died Monday, May 25, after being pinned to the ground for nearly nine minutes with a white police officer’s knee on his neck.

The president called violent and destructive protestors “terrorists,” according to audio of the phone call shared by the New York Times. He said the governors must arrest and charge those protestors with crimes and give them punishments lasting years.

“They’re anarchists, whether you like it or not,” Trump said in the call, according to the Times audio. “I know some of you guys have a different persuasion and that’s OK, I totally understand. I understand. I’m for everybody. I’m representing everybody. I’m not representing radical right, radical left. I’m representing everybody. But you have to know what you’re dealing with, and it’s happened before. It’s happened numerous times. And the only time it’s successful is when you’re weak.”

Last week, Trump posted to Facebook and Twitter that “when the looting starts, the shooting starts.” He has not formally addressed the nation since Floyd was killed or since widespread protesting began.

“Someone throwing a rock is like shooting a gun,” Trump told the governors in the Monday phone call. “You have to do retribution.”

Democratic Illinois Gov. J.B. Pritzker told the president he took issue with his tone and lack of unifying response.

“I wanted to take this moment — and I can’t let it pass — to speak up and say that I’ve been extraordinarily concerned about the rhetoric that’s been used by you,” Pritzker said, according to a transcript. “It’s been inflammatory, and it’s not okay for that officer to choke George Floyd to death. But we have to call for calm. We have to have police reform called for. We’ve called out our national guard and our state police, but the rhetoric that’s coming out of the White House is making it worse. And I need to say that people are feeling real pain out there and we’ve got to have national leadership in calling for calm and making sure that we’re addressing the concerns of the legitimate peaceful protestors. That will help us to bring order.”

Pritzker, as recently as last week, called Trump a “xenophobe” and a “racist” in a public news conference. Since he ran for governor in 2018, Pritzker has frequently criticized the president, and the pair has sparred about the federal government’s novel coronavirus response.

With protests continuing in several Illinois cities Monday, Pritzker hosted a media availability from the James R. Thompson Center in Chicago and addressed the matter upon questioning.

“The truth is that the President has fanned the flames instead of bringing peace and calm,” he said. “It is usually the job of the president to stand up in these circumstances, and try to bring down the temperature, that’s not what this president does.”

He said after about 40 minutes on the call with Trump using what Pritzker deemed to be “inflammatory rhetoric,” he spoke out.

“I wish that the President would hold his words,” Pritzker said. “I wish he would, if he can’t say something that is going to help us across the nation to bring the temperature down, then he shouldn’t say anything at all.”