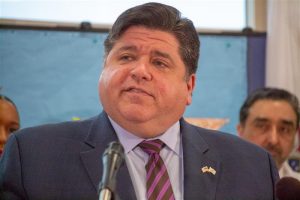 Gov. J.B. Pritzker addressed a number of issues during a news event Feb. 5 at Ridgely Elementary School in Springfield. Among them was his push to make Illinois the first primary state in the presidential candidate nomination process. “We’ve been running elections for an awful long time, and I want to be clear with everybody. This state is a diverse state in so many ways, in ways that Iowa, New Hampshire are not,” Pritzker said. (Photo by Jerry Nowicki/Capitol News Illinois)

SPRINGFIELD — Gov. J.B. Pritzker took questions on elections, the possibility of Illinois moving up in the presidential primaries pecking order and the Freedom of Information Act on Feb. 5, during an unrelated news conference.

ELECTION SECURITY: In the wake of election issues in the first-in-the-nation Iowa caucuses and several reported issues with automatic voter registration and other election matters, Pritzker was asked about his confidence in Illinois’ elections come the March 17 primaries.

In recent weeks, Capitol News Illinois has reported on self-identified non-citizens being registered to vote, incorrect removal of former inmates from the voter rolls, and a policy reversal from the secretary of state regarding the transmission of registration information to 16-year-olds.

“Everything that you’re reporting on, of course, has been looked at, revealed, is being addressed by the Board of Elections, or the secretary of state’s office, or the various agencies that may be involved,” Pritzker said. “… From the moment that I came into office, I focused on making sure we’re keeping the integrity of our elections, the security of our elections, which I think was brought into question in 2016, and we’re doing everything that we can to secure that. As you’ve seen at the edges here, there have been some challenges, glitches, and those are being addressed.”

On automatic voter registration, Pritzker said state agencies are “making sure that it’s being done in an appropriate fashion, making sure all the rules are being followed.”

“I don’t think the public would want it done any other way,” he said. “And so there’s just a very careful process going on. And of course, as each of these things have been revealed, where there may have been a challenge, right, that each of those agencies is looking to make sure that that’s not affecting them, or if it is, that they’re addressing it.”

EARLY PRIMARY: Earlier this week, Pritzker indicated he would like to see Illinois as the home of the first-in-the-nation Democratic primary elections in the future. On Feb. 5 reporters asked if it would be wise to move the state up considering recent flaws in the state’s automatic voter registration system.

“Well, we’ve been running elections for an awful long time, and I want to be clear with everybody. This state is a diverse state in so many ways, in ways that Iowa, New Hampshire are not,” Pritzker said.

He said the state is more representative of the nation in the “rural, suburban, urban environments,” and in the “technology industry and the farming industry, the agriculture industry.”

Pritzker was also asked about the potential of Illinois’ weather hindering an early primary.

“First of all, Illinoisans are tough. Illinoisans come out to vote in any weather,” he said, noting that politicians collect signatures to be on the ballot in nasty weather, and that even March can produce bad weather.

He also touted Illinois’ primary process over caucus systems used in Iowa which he called “much more difficult for people to access.”

“If you are a busy working person with a family, to show up on a Monday evening at 7 p.m. to, you know, stand there for perhaps a couple hours in a caucus process, that’s limiting. Many people just choose not to do it because they can’t afford to do it,” he said.

FREEDOM OF INFORMATION ACT: A search warrant was recently served on the Statehouse offices of House Speaker Michael Madigan, prompting questions from the press corps on whether the state should rethink its FOIA law which allows for exemptions for the General Assembly.

“I think that’s something worthy of being looked into. I haven’t, I have not personally thought about the differences and why there should be a difference between the Legislature and the executive branch with regard to the revelation of internal documents,” Pritzker said. “You know, the legislators themselves operate differently. Each individual legislator operates differently than agencies in terms of record-keeping. … It’s done very differently in the Legislature. So I would say you’re raising something that probably ought to be looked into.”