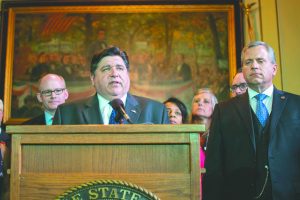 Gov. J.B. Pritzker speaks during a news conference May 27 in the governor’s office in Springfield following the House passage of a joint resolution that will put a graduated income tax amendment on the 2020 general election ballot. The governor this week released a 5-year economic plan for the state that serves as a loose guiding document rather than binding public policy (File photo by Jerry Nowicki/Capitol News Illinois)

SPRINGFIELD — Gov. J.B. Pritzker’s Department of Commerce and Economic Opportunity introduced a five-year economic plan this week, focusing on six industries that can boost the state’s economy and a variety of programs to build its workforce and encourage population growth.

It’s the first such plan since former Democratic Gov. Pat Quinn released his in July 2014, when he declared, “Illinois is in the midst of a resurgence.”

“Over the past five years, the state has battled back from the worst financial crisis in seven decades to put the economy on a positive trajectory,” Quinn said in his 2014 plan.

Pritzker had similar sentiments in this year’s plan. He touted his first seven months in office and emphasized the passage of a $45 billion capital infrastructure plan, legalized recreational marijuana and sports gambling, and the passage of several pro-business reforms.

“For the first time in nearly two decades, we’ve seen simultaneous strong job growth in every region of the state,” Pritzker wrote in the plan’s executive summary. “Underlying my vision is the fundamental principle of equity. No matter their zip code, every Illinoisan deserves economic opportunity. Where in the past sustainable and inclusive economic development has been elusive, instead I am committed to reinvigorating the most important foundational element of Illinois’ economy: our diverse and talented workforce.”

The report, which serves as a loose guiding document rather than binding public policy, also listed challenges to overcome, including outmigration.

“Illinois has experienced a mild outbound migration of approximately 0.3 percent on average for the past five years,” according to the report. “This trend is driven particularly by migration among young people, minorities, and rural populations.”

The Illinois Board of Higher Education reported this year that 48.4 percent of Illinois public high school graduates who enrolled in a four-year institution in 2017 chose an out-of-state institution.

Pritzker’s plan calls for a 50 percent funding increase for Monetary Award Program grants from 2019 levels by fiscal year 2023. Those grants go to college students that have a financial need and help them attend college in Illinois.

Other challenges noted in the plan include income inequality along the lines of race and sex, unresponsive bureaucracy, lagging commercialization of research and development, and indistinct industry strength.

It also mentions a “history of fiscal imbalances,” calling attention to a 736-day budget impasse under former Republican Gov. Bruce Rauner and claiming the budget passed this year was the first such effort that was “bipartisan and balanced” in years.

“The fiscal condition of the state has affected the ability of government to operate efficiently and the ability of businesses to invest confidently. It has also driven many costs down to the local government level, where property taxes are now high relative to other states,” according to the document.

Pritzker emphasized reforming government to “provide world-class customer service,” and “aggressively marketing” the state to its young people and those thinking of moving here.

The governor’s plan looks at government as an entity that can facilitate business growth through “regional economic hubs,” in which “all the key economic actors in regions across Illinois, including state and local governments, industry, unions, universities, and nonprofits are communicating well and working together to accomplish the same economic vision.”

The plan calls for creation of an online platform “that allows Illinois-based small businesses and startups to easily access resources, content, and connections to build and grow their businesses from anywhere at any time.”

It also calls for “updating and broadening” incentive programs for businesses and collaboration between industry and community colleges to develop apprenticeships and training programs, and the development of a “Governor’s Champions” program to acknowledge employers making workforce commitments.

It will also be necessary to revitalize downstate communities and increase investment in communities of color, according to the plan.

“Our state has a legacy of redlining and decades of commercial and industrial disinvestment in communities of color. We will focus efforts and invest resources in transportation, broadband, small business development, and a range of programs that meet those communities’ needs. We will bring down barriers that affect startup businesses and low-income workers, and set targets for diversity in government procurement, oversight, and programming,” the plan stated.

The downstate revitalization effort would include local communities, according to the plan.

“We would work closely with towns and cities throughout downstate Illinois to develop comprehensive plans that could include downtown redevelopment; new housing, parks, or shopping centers; transportation and public transit improvements; new or rehabilitated schools or career and technical education centers; and more,” the report stated.

There is no timeline for the implementation of any of the proposals in the plan, all of which would require further action from either the governor, the General Assembly or both before taking effect.