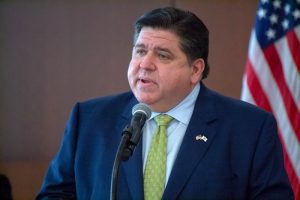 The stated goal of the bill is to drive Illinois to 100 percent clea by 2050. That, Deputy Gov. Christian Mitchell said in an interview April 28, would include nuclear power as a major contributor. Another goal is to bring Illinois to 40 percent of its utility scale energy being produced by renewables, such as wind and solar, by 2030. Right now, that number is around 8 percent.

The bill contains some of the provisions put forth in other legislation, such as raising the rate cap on ratepayer bills for renewable projects from about 2 percent to 3.75 percent; ending formulaic rate increases for utilities immediately; and prohibiting natural gas companies from assessing a certain surcharge on bills starting in January 2022.

It also requires an annual outside audit of Exelon Corporation — the parent company of scandal-ridden Commonwealth Edison — while providing about $70 million in subsidies each year for the next five years to two struggling nuclear plants owned by the company, one in Byron and one in Dresden. A 2016 state law has already provided two other nuclear plants owned by the company with state subsidies.

ComEd has been in the headlines since last year after entering a deferred prosecution agreement with the federal government last July in which the company admitted to a yearslong bribery scheme through which they sought to “influence and reward” then-Speaker of the House Michael Madigan with jobs for his confidants in exchange for favorable action on legislation. Madigan has not been charged and denies wrongdoing.

With other added ethics and accountability measures such as a requirement that the Illinois Commerce Commission “initiate an investigation as to whether ComEd used ratepayer funds in connection with” conduct outlined in that court document, the governor’s office is seeking to strike a balance between accountability and ensuring Exelon’s nuclear fleet remains one of the state’s driving forces in keeping the lights on and reducing carbon emissions.

“We believe that the best way to save our nuclear fleet is going to be at the lowest possible cost to the ratepayer. And what was recommended by our independent audit is some limited short-term help for the next five years,” Mitchell said. “And if you combine that with a carbon price, you actually then can reduce the amount of that help, and if you keep these folks viable for the next five years, our audit — again using all of (Exelon’s) assumptions — would basically say you’re keeping them alive for the next 10 years.”

Mitchell was referring to an $8 per ton price on carbon emissions for fossil fuel providers, such as coal-fired power plants and natural gas plants, that is included in the bill. That fee would escalate each year by 3 percent.

The audit he mentioned was commissioned by the governor’s office through Synapse Energy Economics Inc., costing the state $208,000. It was based on cost numbers provided by Exelon that have not been made public due to a nondisclosure agreement.

Even state lawmakers have not seen unredacted copies of the audit as of Wednesday, which was a point of concern for the state senator who chairs a key energy committee deeply involved in energy negotiations.

Sen. Michael Hastings, D-Frankfort, who is a supporter of a union-backed bill aimed at keeping the nuclear plants viable, said any decision on subsidizing Exelon should not be made until the company and the governor’s office agree to release the unredacted audit.

According to Hastings, without those numbers, it’s unclear what level of subsidy the nuclear plants will need, and whether Exelon will come back to the General Assembly in the future for additional subsidies if those in the governor’s plan prove insufficient.

Still, Mitchell said the $70 million annual subsidy is the best option “that doesn’t fleece the ratepayer, that only gives Exelon exactly what it is they need and preserves the kind of resources we need to invest in things like putting 1 million new electric vehicles on the road by 2030, doubling our investment in renewable energy.”

The bill aims to accomplish that electric vehicle goal by allocating $70 million from the Rebuild Illinois capital infrastructure plan to speed the production of charging stations. The state would offer rebates to companies and organizations up to 90 percent for the cost of the implementing charging stations, up to $4,000 or $5,000, depending on the charger.

The bill does not include reforms to the energy capacity market — a measure that was a staple of previous energy reform bills that have stagnated in the General Assembly and was once a top priority of Exelon.

Capacity payments are funded by ratepayers, essentially paying electricity generators to stay open for a number of years in order to ensure the grid can meet peak capacity needs. Some bill language for other proposals would have taken capacity procurement processes out of the hands of the federally regulated PJM Interconnection regional transmission organization and put it in the hands of the state.

Advocates have said that will allow Illinois to target capacity payments to clean and renewable energy sources.

But changes at the White House and at the Federal Energy Regulatory Commission have alleviated some of the pressure that such a proposal be included in Illinois’ reforms, and the governor’s office said their proposal would more efficiently stabilize the nuclear fleet and emphasize the importance of carbon reduction.

The carbon price is key to that effort, Mitchell said, and revenues derived from it are expected to reach between $400 million and $500 million annually.

“There’s also money that would go toward making sure that displaced workers and communities that are affected by plant closures have the resources they need,” Mitchell said. “That (the Department of Commerce and Economic Opportunity) can do grants to provide additional economic development opportunity in those areas so that workers get the kind of job training they need to go into the jobs of the future. So it would be split up between priorities on both the operations and investments.”

Some of the money would also go toward “budget stabilization,” meaning it would aid the state’s ailing General Revenue Fund, which is lawmakers’ main discretionary spending account.

The governor’s bill essentially jumpstarts the energy negotiation process that has been ongoing since several overhaul proposals sputtered in his first year. Other proposals in the General Assembly include the Clean Energy Jobs Act, a coal-to-solar proposal and a Path to 100 Act. There’s also the labor-backed Climate Union Jobs Act, among others. The governor’s proposal contains some priorities of many or all of them.

Hastings, who for months has been heavily involved in Senate energy working groups as chair of the chamber’s Energy and Public Utilities Committee, said in a phone call Wednesday he saw some good points and some points of concern in the governor’s plan.

The effect of the carbon price must be studied, Hastings said, to determine whether it would cause some fossil fuel plants to close too early, jeopardizing the state’s available power.

He also said he was encouraged that the governor’s office included a measure making the Citizens Utility Board subject to Freedom of Information Act requests and prohibiting it from accepting funds from a foundation tied to a public utility.

But Hastings said more is needed in terms of enabling battery storage for renewable energy – proposals he has touted as sponsor of a coal-to-solar measure backed by Vistra Energy.

“My view on battery storage is that it is probably one of the most key components of solar in general across the state of Illinois and across the country,” Hastings said. “And I say that because, you know, the sun doesn’t always shine, and the wind doesn’t always blow. However, when the sun does shine, we want to make sure that we store that energy so we can disperse it when we need it. That’s part of sustainable renewable energy that some folks overlook.”

The governor’s measure calls for the Illinois Commerce Commission and the Illinois Power Agency to “initiate a proceeding to examine specific programs, mechanisms, and policies that could support the deployment of energy storage systems,” according to a fact sheet from the governor’s office.

Mitchell said the governor’s office chose that path to avoid “being so prescriptive that the ICC and the IPA can’t keep up with changing technology.”