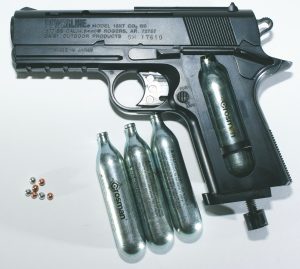 Gov. J.B. Pritzker used only his fifth veto on Senate Bill 2124, a measure state Sen. Chapin Rose, a Mahomet Republican and the bill’s sponsor, said was written to “close a loophole” in a state law, which he said ties school districts’ hands in dealing with incidences in which students bring BB guns to school to cause panic and disruption. (Photo by Hustvedt)

SPRINGFIELD — Democratic Gov. J.B. Pritzker and the Republican sponsors of a bill he vetoed Tuesday, Aug. 20 announced they will continue to work on legislation aimed at clarifying the state’s school code as it pertains to BB guns, air-powered guns and other similar weapons.

Pritzker used only his fifth veto on Senate Bill 2124, a measure state Sen. Chapin Rose, a Mahomet Republican and the bill’s sponsor, said was written to “close a loophole” in a state law, which he said ties school districts’ hands in dealing with incidences in which students bring BB guns to school to cause panic and disruption.

The problem, Rose said in a phone call, is that weapons like BB guns, spring guns, air-powered pneumatic guns and paint ball guns are not specifically addressed in current law. That’s because they technically don’t fit the legal definition of actual guns, and the section of law pertaining to “look alike” guns applies only if the weapon is “used or attempted to be used to cause bodily harm.”

Rose said the bill was written in response to a specific incident in the Mount Zion school district, in Macon County.

In that district, Rose said, the school board believed alternative school would be an appropriate disciplinary action for a student who was involved in an incident with a BB gun.

Mount Zion Superintendent Dr. Travis Roundcount said in a phone call that if a weapon is not fired in such an incident, Illinois law allows for only suspension up to 10 days.

“So the only way that we could send somebody to an alternative school is if they brought the BB gun to school and started shooting people with it,” Roundcount said. “And what school districts more often probably have is they bring a BB gun to school, and then other kids see it. And other kids don’t know if it’s a BB gun, or a real gun, and it causes panic.”

Rose’s measure would have provided that a student who brings one of the weapons to “school, any school-sponsored activity or event, or any activity or event that bears a reasonable relationship to school shall be expelled for a period of not less than one year.”

“The most important thing is that school boards need flexibility to address school safety issues in these circumstances, flexibility they do not have under current law,” Rose said.

Rose said the measure would have granted superintendents and school boards the same authority they currently have to deal with hunting knives, brass knuckles or other such weapons.

“The kid who is otherwise a good student, has no blemishes on his record, he’s got a BB gun in his car, that’s in one category,” Rose said. “A kid with clear mental health issues, who’s walking through the hallway or walking through the locker room brandishing a gun, clearly to incite a rise out of classmates, is asking for serious, serious trouble.”

Thus, he said, the measure was designed to make alternative school an allowable disciplinary action against the latter student.

“I’m for giving school boards, locally elected school boards, as much discretion as they can possibly have when it comes to dealing with student safety,” Rose said.

In Pritzker’s veto message, he said current law “already equips school boards, superintendents, and administrators with the tools necessary to discipline students who bring inappropriate, potentially harmful objects to school.” But he said he was willing to work with bill sponsors to “address any ongoing concerns surrounding student safety.”

“The School Code authorizes school boards to expel students who bring weapons to school. It also authorizes school boards to establish policies to discipline students who engage in gross disobedience and misconduct. These policies provide authority for school districts to discipline a student who brings a pneumatic gun, spring gun, paint ball gun, or BB gun to a school or school activity, and to tailor the punishment to the circumstances of the incident,” Pritzker wrote.

He also said to avoid the “school­to-prison pipeline,” state law “should be crafted to ensure that students are not disproportionately disciplined in a manner that affects the long-term trajectory of their success in school and life.”

“The School Code reflects this philosophy by recommending that school officials consider forms of non­exclusionary discipline prior to using out-of-school suspensions or expulsions,” Pritzker wrote.

Rose and House sponsor Rep. Dan Caulkins (R-Decatur) said they were contacted by the governor last week and expect to come up with a new bill that is agreed upon by all parties by the time the General Assembly returns to address the governor’s vetoes in late October and early November.

The concept had wide support in the General Assembly, as it passed the Senate 56-0 and the House 109-1 with five present votes prior to the veto.