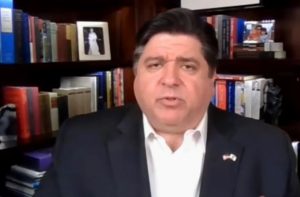 Gov. JB Pritzker talks about why he thinks some regions of the state shouldn’t reopen sooner than his Restore Illinois plan calls for during Wednesday’s daily press briefing from his home in Chicago. (Credit: blueroomstream.com)

SPRINGFIELD – The state saw its largest daily increase in COVID-19-related deaths with 192 Wednesday, May 13 as Gov. J.B. Pritzker warned business owners and local governments of consequences they will face if they defy his stay-at-home order.

Pritzker said there are no “easy decisions” in a pandemic and said he sympathizes with local elected leaders struggling with difficult choices.

“But what I don’t have sympathy for is those so intent on disregarding science and logic, so afraid to tell their constituents what they may not want to hear – that they put more people’s lives at risk,” the governor said during a virtual news conference from his home in Chicago.

Pritzker has faced pushback from local officials across the state who are seeking to reopen sectors of their economy earlier than the May 29 date when regions can begin moving to the third phase of his reopening plan.

He also warned of consequences for businesses that try to reopen too quickly.

“For the small minority of businesses that choose to ignore the medical doctors and the data, and to ignore your legal obligations to residents of your community, there will be consequences,” he said.

Those include revocation of licenses for those businesses and professionals licensed by the state.

“Counties that try to reopen in defiance may not be reimbursed by FEMA for damages they cause, because they ignored the law,” he said. “Local law enforcement and the Illinois State Police can and will take action. But there is no consequence the state could impose that is greater than the harm that you will do to your own communities.”

It was announced Wednesday that the General Assembly would convene a legislative session next week to focus on pandemic response, a state budget and other matters. Pritzker said he respects Republican calls for bills requiring legislative approval to extend his disaster proclamation, but he said all actions thus far are aimed at public health.

(Lawmakers to return to Springfield for session May 20-22)

“I think everybody understands that what I’ve been doing is following the science and the data and doing what’s best for our economy, given that the virus is out there,” he said. “I want to remind everybody that when people get sick, and when they die, that too has an economic cost aside from the terrible cost to families and communities. There’s also an economic cost to our state when that’s happening, so take that into account when you’re suggesting that we should follow a different path.”

The state reported 1,677 new cases of the virus in 17,668 test results reported in the past 24 hours. That marks a 9.5 percent positivity rate, which is the lowest since March 27 when fewer than 5,000 persons were tested.

Hospitalization numbers remain roughly flat, with 4,563 hospitalized due to COVID-19 as of midnight Wednesday, 1,208 of them in intensive care beds and 714 of them on ventilators.

Pritzker also gave an update to the state’s strategy for dealing with spread at long-term care facilities. He also said a resident of the state-run Manteno Veterans Home who had been in hospice for several months recently tested positive for the virus and died.

That facility had 30 residents of 220 and 19 employees of 307 test positive for the virus between April and May, and all residents have been tested recently. All positive residents and others contacted by them have been isolated.

Pritzker said the state is testing residents even at long-term care facilities that do not have positive cases of the virus, as almost half of the state’s 3,792 COVID-19-related deaths can be tied to such facilities.

“IDPH has prioritized testing at long-term care facilities and to our vulnerable populations where infection is more likely to lead higher severity cases, especially amongst communities of color,” he said.

Those at state-run veterans homes face the same precautions as all long-term care facilities in Illinois, he said.

Since March 5, all visitors and staff have been screened before entry into the home, and by March 10 all vendors were barred from visiting facilities and off-campus activities and on-site construction projects were canceled. Family visits were confined to end-of-life visits as well.

“Our state and stockpile always provides a backup for them, and is not the primary supplier for private business, such as nursing homes,” he said. “Having state government fulfill each individual request would not be efficient, or in any way, manageable.”

Still, he said, the Illinois Emergency Management Agency and IDPH have coordinated an effort to directly deliver PPE to more than 1,200 nursing homes and other long-term care facilities across the state. Those shipments began on April 30 and have reached more than 85 percent of the facilities.