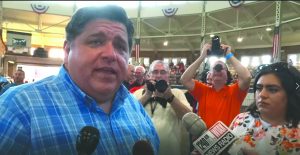 Gov. J.B. Pritzker speaks with reporters in the Coliseum building of the Illinois State Fair after he and his wife paid $75,000 to purchase the grand champion steer, raised by 13-year-old Cole Caldwell, of Elmwood, during the Governor’s Sale of Champions. Aug. 13 was Ag Day at the fair. (Photo by Peter Hancock/Capitol News Illinois)

SPRINGFIELD — In a classic duel of Pritzker vs. Pritzker, the first lady won.

Gov. J.B. Pritzker and First Lady M.K. Pritzker engaged in a bidding war at the Illinois State Fair on Tuesday, Aug. 13 with the governor’s wife placing the winning bid of $75,000 for a grand champion steer named Lucius.

“I have to say, there’s not a piece of that steer that doesn’t entice me,” the governor quipped with reporters after the sale. He later explained that much of the meat would be donated to the Central Illinois Food Bank.

Lucius, a 1,300-pound steer, was the prize animal of 13-year-old Cole Caldwell, of Elmwood in Peoria County. He had told fair officials earlier that whatever money he made from the sale would go toward his college education and future livestock projects. Still, he said afterwards, he was pleasantly surprised at how much Lucius fetched.

“I was surprised,” he said after the sale. “It’s a little bit of bragging rights for me. My sister won three years ago, and hers sold for less than mine did.”

The Governor’s Sale of Champions, held in the recently renovated Coliseum building on the fairgrounds, was the highlight of Agriculture Day at the State Fair. In addition to the grand champion livestock, bidders at the auction also competed for grand champion cheeses, meats and other commodities, some of which garnered large amounts of money.

But it was the livestock sale that drew the most attention, mainly because those animals are raised and shown by young adults in the 4-H organization.

One of those was Faith Foster, 17, of Paxton, who won the grand champion title in the poultry meat division for her three Cornish cross chickens, which sold for $5,000. Two of her sisters also won in the same category in 2010 and 2012.

Foster said she tends not to get very attached to the animals she raises, but some of the other contestants said they had mixed feelings about selling off the prize animals they had raised.

“I’m pretty sad. I don’t want him to leave,” said Macy DeBlock, of Aledo, whose lamb Whalen also was a grand champion. But then she shrugged her shoulders, suggesting she already understood animal life on a farm.

Parker Karrick, of Patoka, who chairs the Illinois 4-H leadership team, said the 4-H program, which began in Ohio in 1902, has become an integral part of rural communities, and an important part of growing up in rural America.

“It is absolutely very important because it gives rural youth a voice,” she said. “A lot of times they may not have the most opportunity in their schools or other organizations, so 4-H has stepped in and given those kids a voice through agricultural activities, and also different activities with STEM — science, technology, engineering and math. 4-H has really given the rural community a voice.”’

SPRINGFIELD — Dick Durbin was at the Illinois State Fair Aug. 13 to talk about agriculture. It was Ag Day, after all.

Instead, the state’s senior U.S. senator spent a significant amount of his time with the press discussing state politics and policy. Durbin specifically addressed questions about members of his Democratic Party who made recent headlines. 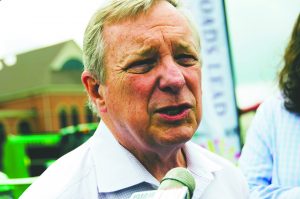 U.S. Sen. Dick Durbin talks to members of the media Tuesday during Ag Day at the Illinois State Fair in Springfield. Durbin talked about ag issues, but much of his back-and-forth with the press was about state political scandals. (Photo by Rebecca Anzel/Capitol News Illinois)

State Sen. Tom Cullerton, from Villa Park, was indicted by a grand jury earlier this month on federal charges of embezzling funds from a labor union.

Former colleagues of House Speaker Michael Madigan were subjects of FBI raids. The scope of that investigation is unclear.

And former Gov. Rod Blagojevich is serving time in a federal prison in Colorado. He is back in the news after comments made by U.S. President Donald Trump about a possible commutation.

“Listen, neither political party has a monopoly when it comes to virtue or moral turpitude,” Durbin said. “It is human nature and the weakness of human nature that leads to Democrats, Republicans and those not in public office to commit crimes. We should be intolerant of it, speak out against it, and work together on a bipartisan basis to avoid it.”

The senator addressed Trump’s continued consideration of forgiving Blagojevich’s 14-year prison sentence, which he received in part for his efforts to sell the U.S. Senate seat vacated by Barack Obama when he became president.

Durbin told reporters he thought the judgment Blagojevich received was “excessive” and “does not really match up with the crimes that he committed.”

“You know, what he did was wrong,” Durbin said. “He was arrested, prosecuted, convicted obviously, incarcerated, disgraced and separated from his family for seven-plus years.”

He added that he knows it is not an opinion shared by his Illinois colleagues, many of whom told Capitol News Illinois on Aug. 12 that Trump should not forgive the rest of the former governor’s prison sentence.

Durbin also weighed in on comments made this week by Republican state Rep. David McSweeney, of Barrington Hills, who supports reinstating capital punishment in the state in the wake of mass shootings in California, Texas and Ohio and recent gun violence in Chicago. McSweeney said he plans to either sponsor or co-sponsor legislation to that end.

Durbin said there is “no reason to turn back to it,” and that he thinks the death penalty does not have the “deterrent effect” its supporters say it does.

“I don’t think it’s any day at the beach to be given a life sentence,” he said. “I don’t think that is going to stop these people who have reached such a level of mental anguish that they go out and kill innocent people.”

When he had an opportunity to talk agriculture, the senator had a message for Illinois farmers, one he said is “a little touchy” — climate change, and how the Prairie State’s agriculture industry can benefit from the changes and adaptations that result.

He pointed to wind turbines as an example of a way farmers can benefit from green energy. The land chosen gets an economic boost — “a pretty good deal,” Durbin said — and the turbine does not interfere with the agriculture business of the farm, he added.

“There are ways to reduce the carbon and greenhouse gas emissions that the farmers can be part of and do in a way that comes back to their economic benefit,” Durbin said. “I use the wind turbines as an example — 20 years ago, people didn’t see this coming, but now it’s become a major part of generating electricity. Rural America has to be right smack-dab in the middle of this conversation.”

“Market forces,” he added — not looking at regulations as penalties but as opportunities — are the key to adaptation in agriculture.