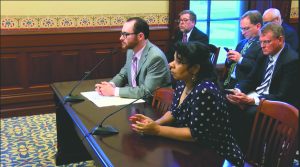 Reps. Daniel Didech (D-Buffalo Grove) and Rita Mayfield (D-Waukegan) explain the function of a property tax relief fund that would be created under a bill they sponsor. They testified Tuesday to a House committee at the Capitol in Springfield. (BlueRoomStream)

SPRINGFIELD – A pair of measures aimed at addressing high property taxes in the state passed committee Tuesday, May 29, one day after being touted by Democratic Gov. J.B. Pritzker upon passage of a graduated income tax constitutional amendment.

“Today, I’m proud to announce a bipartisan and bicameral property tax task force that will review the entirety of our property tax system, study best practices in other states, and make short- and long-term recommendations by the end of the year,” Pritzker said in a news conference Monday after the graduated income tax amendment passed the House. “The creation of this task force will be included in our fair tax package, and will have the full support of my office.”

Republicans in the House Revenue and Finance Committee, however, were skeptical that any real property tax relief would result from the task force sponsored by Rep. Jonathan Carroll, a Northbrook Democrat, which passed committee unanimously.

“I’ve been here five years, and I have absolutely no confidence that anything whatsoever will change other than the folks that like the status quo the way it is will destroy your hopes as they have everyone else’s. Good luck,” Rep. Margo McDermed, a Mokena Republican, said.

Carroll, who was initially opposed to the graduated income tax amendment but credited the governor for his switch to supporting the measure, said he wasn’t looking to the past, but the future.

“I would hope that you’d be a part of the solution and not necessarily continue naysaying on it,” he said.

Carroll said the task force would “make tough decisions,” address “across-the-board” property tax drivers and would not be “without teeth.”

Members of the task force would be uncompensated and appointed by the governor, Senate and House leaders, and would include lawmakers and other local officials and community members, Carroll said. They plan to meet over the summer to bring recommendations forward next year.

While the Republicans voted unanimously to pass the task force bill, all of them voted against the creation of the property tax relief fund.

Rep. Rita Mayfield, a Waukegan Democrat, said there would be no new state revenues needed to sustain the fund, and it would be up to future state Legislatures to determine whether appropriations would be provided for the fund.

McDermed, who serves on a capital infrastructure task force, said spare funds are not easy to come by in Illinois’ budget.

“I am not aware, and believe me, our group has scoured under every rock in the state of Illinois for a penny, so where exactly are you going to find this money?” she asked.

Rep. Daniel Didech, a Buffalo Grove Democrat and the bill’s sponsor, said determining funding would be a function of the task force.

“If the result of the task force is that we don’t have the resources for this, then so be it,” he said. “But I think this is an important enough issue that it deserves close attention and we should do our due diligence to find out if there are the resources to provide property tax relief.”

According to the bill, “moneys in the fund shall be used by the state comptroller to pay rebates to residential property taxpayers in the state.”

The state does not levy or collect property taxes in Illinois; only local taxing bodies such as school boards, municipal governments and counties have that authority. The largest contributor to most local tax bills are K-12 schools, which for years have faced funding shortfalls and proration from insufficient revenues provided by the state.

McDermed questioned if it was a good idea to provide state tax relief without addressing local taxing bodies’ ability to raise their levies every year.

“I think that this idea that we’re going to subsidize local taxing bodies without reforming local taxing bodies or the way they tax is going to double down on the toxic taxing system that we have right now in the state of Illinois and this is not a well-taken proposition in any way shape or form,” she said.