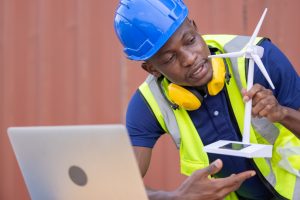 New proposed legislation is designed to promote minority-owned businesses and jobs in the clean and renewable energy sector.

SPRINGFIELD – Aiming to increase diversity in wind and solar jobs, a proposed measure in the Illinois General Assembly would require more transparent reporting on the level of participation of minority-owned businesses in clean energy jobs.

Rep. William Davis, D-Hazel Crest, advanced House Bill 4217 through the House Energy and Environment Committee on Tuesday, Jan. 18. The measure aims to increase “diverse participation in projects that could include African-Americans, Latinx, and women-owned firms.”

In the bill, energy suppliers who generate more than 500 kilowatt hours of electricity with at least 100,000 customers and companies that develop, install, or maintain a renewable energy project with annual revenues over $15 million would be required to submit annual reports on procurement goals and spending on contracts with female-owned, minority-owned, veteran-owned companies and small businesses.

Annual reports would need to outline a buying plan for specific goods and services the company plans to procure in the next six to 18 months, include any procurement codes used by the company. It’s an effort to assist entrepreneurs and diverse companies in understanding upcoming opportunities with the company submitting the buying plan, according to the bill.

“Part of our effort, as we have done in many other sectors, is to start by trying to ask those individuals that are doing it, to supply reports, to fill out reports and show us what they are doing relative to diversity, and not only what their numbers look like but also, in some cases, the plan to increase that diversity over time,” Davis said.

Businesses that make less than $15 million a year would possibly be exempt from filling out diversity reports but would still have the opportunity to do so if they desired.

Dan Johnson, a lobbyist representing the Hispanic American Construction Industry Association, said the idea of these reports is to act as a bridge between large buying institutions and minority-owned, female-owned and veteran-owned businesses.

Reports would be found on the Illinois Commerce Commission’s website under supplier diversity, which makes it easier for utility companies to look up and get in touch with the desired businesses.

Since renewable energy focuses more on the maintenance of wind and solar farms, Johnson noted that the law had yet to contemplate the reality of renewable energy businesses and suppliers when building these farms. Language in HB 4217 would align standards with the Clean Energy Jobs Act, he said.

“In a way, we’re sort of trying to catch up to the workforce diversity that was in the (CEJA package) to say let’s catch up on the supplier diversity piece of it as well,” Johnson said.