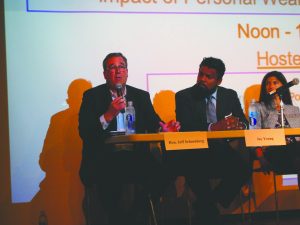 Former state Sen. Jeff Schoenberg talks during a Sept. 10 Center for Illinois Politics forum about the impact on politics since high-net-worthy individuals began running for office. Others on the panel with Schoenberg were Jay Young, executive director of Common Cause, and Maryam Judar, executive director of the Citizen Advocacy Center. (Photo by Kevin Beese/Chronicle Media)

The rules of engagement in Illinois politics changed with Bruce Rauner and where they go in the future is anyone’s guess, according to campaign reform and political experts.

“There’s been a distinct change in recent years. Up until Rauner, high-net-worth individuals had limited success applying their personal wealth in races,” said former state Sen. Jeff Schoenberg during a Sept. 10 forum in Chicago on money in state politics.

Rauner spent $65 million — more than $27 million of that his own money — to win the 2014 governor’s race. Then Democratic challenger J.B. Pritzker and Rauner teamed up to create the most expensive governor’s race in U.S. history, topping out at more than $250 million and nearly all of that their own money. Pritzker doubled Rauner in financing his campaign, dropping more than $171 million into his own campaign coffers.

Jay Young, executive director of Common Cause, a nonpartisan grassroots organization dedicated to upholding the core values of American democracy, told those attending the Center for Illinois Politics forum that money is just one tool, albeit an important one, in getting elected.

“Money lets you have a larger tool belt,” Young said.

The Common Cause leader said he doesn’t know if the emergence of high-net-worth individuals like Rauner and Pritzker will mean only rich individuals are picked as candidates for state office going forward.

“I think there are other avenues out there to buttress against money,” Young said, “but other voices might be drowned out by money.”

Lake Forest College professor Zachary Cook said there are relatively few examples on money’s impact on Illinois politics so it is hard to make generalities. He noted that wealth does not always guarantee victory in political races.

“If it was just about wealth, Jim Oberweis would be governor, U.S. senator and about three other things already,” Cook said.

He said loopholes like self-funding campaigns to get rid of spending caps for the candidate and what he or she can give to a political party need to be closed.

Susan Garrett, a former state lawmaker and the co-founder of the Center for Illinois Politics, noted that Illinois is the only state that allows campaign-spending caps to be broken if a candidate self-funds his or her campaign with $250,000 or more.

“The average person can’t compete with that,” Garrett said. 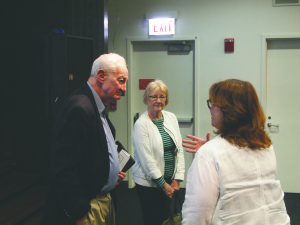 Mike Lawrence, former director of the Paul Simon Public Policy Institute, listens to an audience member’s comments after the panel discussion at Columbia College in Chicago about money in Illinois politics. (Photo by Kevin Beese/Chronicle Media)

Asked if the last two governors would have proven successful without their immense fortunes, the majority of the panel agreed that without money the outcomes would not have turned out the way they did.

“Local and state primaries are where money makes the most impact,” Cook said.

Cook noted that in 2014 when Rauner began an avalanche of dollars into the Republican primary, he got a spike in polling numbers that eventually handed him the party’s nomination and victory against Democratic Gov. Pat Quinn.

Panelists said that campaign advertising is not the only device affected by personal wealth and that gubernatorial races are not the only contests experiencing large insertions of cash.

“We are seeing more money spent in mayoral elections across Illinois,” said Maryam Judar, executive director of the Citizen Advocacy Center. “Any challenger (to an incumbent) is challenged themselves,” typically through disputed signatures needed to make it on the ballot.

“There’s a reason we have many uncontested elections in Illinois,” Judar added. “The ballot process requires money for election lawyers.”

Mike Lawrence, former director of the Paul Simon Public Policy Institute and former press secretary for Gov. Jim Edgar, advised people looking to talk to their local state representatives and senators about issues to set up a time to talk with them when they are back in the district. 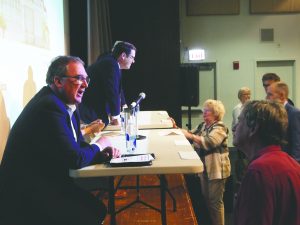 Schoenberg talks with an audience member after the program on money’s impact on Illinois politics. (Photo by Kevin Beese/Chronicle Media)

“You don’t necessarily need to go to Springfield,” Lawrence said. “People who are interested in talking to their elected officials should visit their district office.”

He also encouraged residents to be engaged and not bashful about talking with their local state reps.

“You do have a say. They will listen to you,” Lawrence said.

He also said citizenship has to start early, teaching youth the importance of voting and being involved in their government.

“They are going to have to deal with critical things in our country,” Lawrence said. “They need to keep track of what’s going on.”