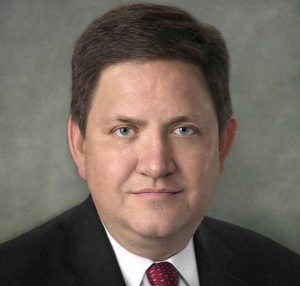 A bill that would eliminate and effectively ban red light photo cameras from intersections in non-home rule communities, while targeting specific counties, passed Feb. 5 through the Illinois House Transportation Vehicles and Safety Committee by an 11-0 vote.

The bill is essentially a reintroduction of a similar measure passed in 2015, but was halted at the Senate transportation committee level. Its chairperson at the time was state Sen. Martin Sandoval, D-Cicero, who pleaded guilty Jan. 28 to federal bribery and income tax evasion  related to favoritism to the red-light camera industry. By his own admission, he accepted more than $250,000 in bribe money including the red-light camera company, Chicago-based SafeSpeed LLC.

His involvement was captured on an audio recording made during a restaurant meeting with another state senator, purported to be Terry Link, D-Vernon Hills. Link has denied his participation. Sandoval’s plea agreement stated that he engaged in “corrupt activities with other public officials and accepted money from other people.” He has agreed to cooperate with any future investigations.

State Rep. David McSweeney, R-Barrington Hills, sponsored the bill in 2015, as well as the current one, and will pursue having it enacted. “I passed the bill in 2015, and it was killed by (Martin) Sandoval in the Senate,” he said, when contacted, by email. “Red light cameras are being used to raise revenue, not improve safety.”

Home rule status is granted automatically to municipalities with threshold populations of 25,000. The designation applies if its boundary electorate has approved a binding referendum for the status, if the population is less than 25,000. The benefit is in allowing the governmental unit to make decisions on its own programs without state intervention or mandate. HB 322 identifies the intent as applying to non-home rule communities only.

McSweeney also co-sponsored accompanying legislation, House Bill 323, which would cover municipalities and communities statewide, regardless of home rule status, by repealing “authority to use automated traffic enforcement systems at intersections in which cameras are used to photograph or video records a motor vehicles failure to stop or yield.”

It also limits supplying those recorded images for “the purpose of recording its speed.” The bill was referred to the House Rules Committee, March 29, and while it has gained six more co-sponsors has not left the committee level.

House Bill 322’s actual summary wording states that “after January 1, 2020, no non-home rule unit within the counties of Cook, DuPage, Kane, Lake, Madison, McHenry, St. Clair, and Will may enact or continue to enforce an ordinance for an automated traffic law enforcement system to enforce violations of intersection traffic control signals … Amends the State Mandates Act to require implementation without reimbursement from the State.” 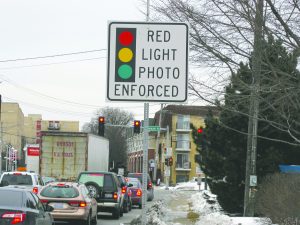 McSweeney’s office in a press release stated that more than $1 billion in fines have been collected from red-light cameras, and multiple people have been indicted for crimes connected to the red-light camera industry. (Chronicle Media file photo)

A Feb. 5 press release, from Rep. McSweeney’s office said that he has long been a proponent of banning red-light cameras. “The bribery charges against former State Senator Martin Sandoval provide even more evidence of the need to ban red-light cameras,” he said. “These cameras are nothing more than a get rich scheme for the companies that install the cameras and the politicians who profit from protecting the companies behind this scam. It is time to end this corruption once and for all.”

The 2015 version of the bill, passed in the House by a 79-26 vote. The current measure being considered amends Section 5 (f) of the Illinois Vehicle Code, with respect to red-light camera installation and enforcement, states that “no non-home rule unit within a county designated may enact or continue to enforce an ordinance providing for an automated traffic law enforcement system to enforce (code) violations.” However, it continues to allow home rule governments are still to continue the practice.

Red-light enforcement cameras are triggered by vehicles proceeding through an intersection after the green light has changed, or an incomplete full-stop for a right turn on red. Potential violations are reviewed by a traffic enforcement officer of the governmental unit, and forwarded to the respective contractor for collection of a standard $100 fine amount. The violations are not chargeable “moving” citations against an individual’s Illinois driver’s license, but considered administrative debts due to the governmental unit.

Lombard-based Red Speed Illinois LLC operating installations in the city of Waukegan cites that the accumulation of five or more unpaid fines may result in notification to the Illinois Secretary of State’s Office. However, several months ago, Illinois Comptroller Susana Mendoza announced that her office would no longer withhold refunds, or payable amounts, to individuals in lieu of red-light camera debt claims for distribution to claims by governmental units.

“It is time to end this madness,” McSweeney said, in the release. “These cameras are not about making communities safer. They are about producing more revenue for local governments and padding the pockets of political insiders. It is another example of the culture of corruption in Illinois. My legislation is big step forward in fighting Illinois corruption.”