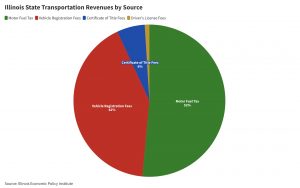 SPRINGFIELD – Despite Illinois’ efforts to smoothly integrate electric vehicles into the state’s economy, a new report from the Illinois Economic Policy Institute is warning of a potential steep decline in transportation revenue as the process of electrification accelerates.

The primary issue is motor fuel taxes, which will see a significant drop as more electric vehicles make their way to the road and fewer people fill their cars with gas.

Since motor fuel taxes make up the backbone of state funding for road and bridge projects, ILEPI, which has strong ties to organized labor, warned in its report that new revenue sources will have to be identified to ensure the state’s 10-year capital improvements plan remains on track.

“There’s absolutely a benefit to having EVs but it will ultimately have a strong impact on transportation funding,” Mary Tyler, the author of the report, said in an interview. “It’s something that I don’t think is talked about enough.”

The report’s main policy recommendation is implementing a vehicle miles traveled, or VMT, fee which would replace the existing motor fuel tax with a fee determined by the number of miles a car travels on Illinois roads.

The idea has been floated in the past, including by Gov. JB Pritzker in an interview with The Arlington Heights Daily Herald during his initial gubernatorial campaign in 2018.

“In some states (such as Oregon), they have done tests recently for a VMT tax because we have more and more electric cars on the road, more and more hybrids, and because gas mileage is rising,” then-candidate Pritzker told the outlet. “It’s only fair if you’re on a road and traveling on that road that you should pay your fair share.” 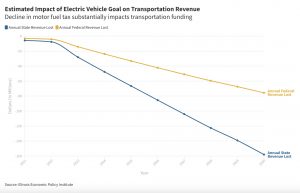 In his four years as governor, however, Pritzker has not made a serious legislative push for a VMT.

It’s an issue that ILEPI says will become more pressing as the state moves toward its goal of putting 1 million electric vehicles on state roads by the end of the decade – a goal written into law with the passage of the Climate and Equitable Jobs Act in 2021.

“Looking at the growth we’re seeing, we’re seeing it grow at a faster rate than what we ever have before,” Tyler said.

According to Tyler’s estimate, Illinois would have to add 119,000 electric vehicles every year in order to meet their goal of one million by 2030. If that came to fruition, the state would lose $765 million in combined sales and motor fuel tax when accounting for added EV fees. Counting federal revenues, that figure would jump up to $1.1 billion.

Electric vehicles aside, Tyler said fuel-efficient vehicles pose an additional threat to the state’s transportation revenue. Roughly 10 percent of registered vehicles in Illinois are electric, while the rest of the 11 million are increasingly becoming more fuel-efficient.

Tyler calculated that the total state and federal revenue loss over the next decade would be about $4.3 billion.

That loss would be especially threatening to the back half of Pritzker’s historic 10-year, $45 billion capital infrastructure plan known as Rebuild Illinois.

The roads-and-bridges portion of the 2019 program was made possible in large part by doubling the state’s motor fuel tax, which hadn’t seen an increase since 1990, then tying it to inflation in subsequent years.. The infrastructure plan also increased Illinois’ annual electric vehicle registration fee by $100 annually.

Tyler said while the fee hike helped replace some of the lost revenue, it won’t go far enough.

“As soon as the change can be made, the better,” Tyler said. “Even to this day, there are EVs on the road that are not paying as much as they would be on motor fuel tax. So there is an impact, it’s just right now the impact isn’t as big as what it will be in the future.”