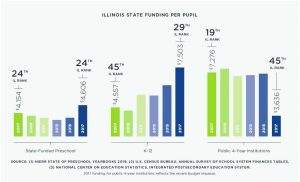 SPRINGFIELD — A new report from an independent policy and advocacy organization is calling for increased state investment in public education in Illinois, particularly in early childhood and higher education.

“Overall, our outcomes are improving despite insufficient state investment in programs and schools. We must build on the progress of K-12 funding reform and ensure our early childhood and postsecondary programs are fully and equitably funded so students and families have access to the resources they need to thrive,” Advance Illinois said in its 2019 “The State We’re In” report.

Advance Illinois was founded in 2008 by leaders from several civic, philanthropic, business and education organizations across the state. The group’s stated purpose is to work “toward a healthy public education system that prepares students to achieve success in college, career and civic life.”

The evidence-based funding formula calls for an added $350 million in K-12 education spending annually and directs that money to the schools furthest from adequate funding. This helped decrease the number of school districts funded at less than 60 percent of their adequacy targets from 168 in 2017 to roughly 34 in 2019, according to the report.

Still, nearly half of Illinois’ 852 school districts are working with “less than 70 percent of the funds they need to adequately meet their students’ needs,” the report said.

While K-12 education spending increased from 2007-17, over that same span, per-pupil state spending at four-year higher education institutions was decimated. In 2007, Illinois spent $7,276 per student at public four-year institutions, but that number fell to $3,636 in 2017. That was a steep enough fall to move the state from the 19th to 45th highest in the nation.

The decreased state investment came as higher education costs continued to rise. In the last 15 years, annual inflation-adjusted tuition at public four-year universities has increased 62 percent from $8,641 to $13,970.10, the report said.

Because of this, a family earning the median household income of $62,992 would have to pay 27 percent of its income to send one child to a state university, provided they receive no state or federal aid. That number jumps to 50 percent of annual income for those living at the federal poverty line.

The decreased spending coincided with an overall enrollment decline in Illinois institutions of higher education, which dropped from roughly 896,000 in 2009 to 747,000 in 2017.

The overall high school graduation rate has grown in recent years, and the rate for black (75 percent) and Latinx (81 percent) populations also inched closer to that of white populations (91 percent), the report said. Despite the gains, other attainment gaps by race are growing.

“While Illinois Latinx and black students’ growth is equal to or exceeds their white peers in both reading and mathematics, they are still performing below grade level in 8th grade,” the report stated. “Put differently, our current rate of growth, while significant, is neither far-reaching nor fast enough to make up for early gaps and prepare all students for college and careers.”

On top of that, Illinois offers inadequate birth-to-three services and support for low-income families, according to the report. Just 59,000 of roughly 300,000 eligible children aged birth through four receive assistance from the state’s Child Care Assistance Program, the report found.

“The need far outpaces the state’s investment for these families and is leaving a critical hole in services and supports for our children,” according to the report.

“There are early childhood ‘deserts’ with essentially no publicly supported programming for children in need from birth to 3 years, and communities with no public pre-kindergarten for 3- and 4-year-olds from low-income households,” the report stated.

Access to school counsellors also lags in Illinois, which has one counsellor for every 320 students, while the national average is of one for every 239.

“As a state, we have demonstrated our ability to make real progress for all students on challenging issues. There is more work to do and more children counting on us to tackle it,” the report concluded.