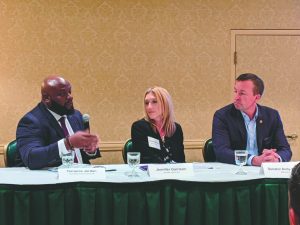 Terrance Jordan, principal at Black Hawk Elementary School in Springfield, speaks during an event Thursday in Springfield to discuss Advance Illinois’ report on the state of public education in Illinois. Joining Jordan in the discussion are Jennifer Garrison, superintendent of the Vandalia Unit School District and a member of the Illinois Board of Higher Education, and Sen. Andy Manar (D-Bunker Hill). (Advance Illinois photo)

SPRINGFIELD — A group that advocates for public education in Illinois released a report indicating the state has made some progress in improving educational outcomes over the past five years, but it still has a long way to go to achieve the goal of having 60 percent of all adults attaining some kind of college-level degree or certificate by 2025.

“To achieve this goal, we must focus on the entire education continuum, birth through career, and work to ensure that all students are on track across the critical academic milestones that mark their road to postsecondary completion,” according to the report by Advance Illinois.

The report, “The State We’re In 2019,” was released in mid-October. The group has since been traveling the state to discuss the significance of its findings on local communities.

The report examines how the state performed on a wide range of educational outcome measures — from kindergarten readiness to postsecondary completion — in 2018 and in most cases compares that with 2013. It also shows how the state ranks with other states on those measures.

Perhaps the most troubling statistic in the report concerns kindergarten readiness, data for which became available only in 2018. According to the Illinois State Board of Education, only 26 percent of 5-year-old children in Illinois showed the social, emotional and academic skills needed to start kindergarten.

The report also indicated wide racial, ethnic and economic disparities in kindergarten readiness, which is largely attributable to the availability of early childhood education programs in different communities.

“Kindergarten readiness is critical,” the report states. “Performance gaps on key measures such as fourth-grade reading and eighth-grade math begin to take root much earlier — during a child’s first and most formative years. Kindergarten-ready students have an 82 percent chance of being academically on track and mastering key skills by age 11. Children who are not kindergarten-ready have a 45 percent chance of reaching proficiency.”

In other areas, Illinois made slight improvement over the five-year period. For example, 35 percent of fourth-grade students in 2018 met or exceeded state standards for reading skills, a key indicator of a student’s future risk of failing or dropping out of school. That was up one percentage point from 2013.

But there were fewer students demonstrating mastery of eighth-grade math skills — 32 percent in 2018, down from 36 percent in 2013.

Postsecondary enrollment among high school graduates rose during the period — 53 percent in 2018 compared to 45 percent in 2013 — but the report also noted that enrollment is down across the board at Illinois public colleges and universities, an indication that students are leaving the state to attend college.

Finally, the report noted that 45 percent of Illinois adults had an associate degree or higher, up from 43 percent in 2013 but still far short of the goal of 60 percent by 2025.

Advance Illinois gave credit to the new Evidence-Based Funding formula the state adopted in 2017, which requires annual increases in K-12 education funding, with the bulk of that new money earmarked for the least well-funded districts.

But it also said inadequate funding remains an issue at all levels of public education, especially for low-income families.

“From preschool to postsecondary, lack of funding and affordability are critical barriers for low-income residents,” the report states. “This is troubling because early education determines outcomes in later school years, and postsecondary attainment remains key to employment and a living wage. If we lose students early, we risk losing them entirely. And if we fail to support postsecondary success, we damage the economic prospects of our students and our state.”