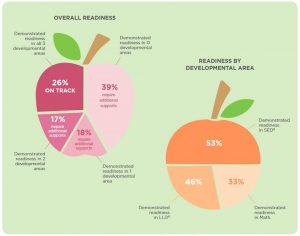 A summary of the 2018 Kindergarten Individual Development Survey on school readiness. (Source: Illinois State Board of Education)

SPRINGFIELD — A new report from the Illinois State Board of Education says the vast majority of children who entered kindergarten last year lacked many of the skills and developmental strengths needed for long-term success in school.

The second annual Kindergarten Individual Development Survey, or KIDS report, shows about only one-fourth of those students, 26 percent, demonstrated readiness across all three key development areas: social and emotional development; language and literacy development; and math.

The report also showed wide disparities between racial, ethnic and socioeconomic groups, with black and Hispanic students and those from low-income households much less likely to be fully prepared for kindergarten.

State Superintendent of Education Carmen Ayala said in a statement the report demonstrates a need for more investment and more equity in access to early childhood education.

“Data from the second year of KIDS implementation affirms the importance of comprehensive, high-quality supports for early learners,” Ayala said. “Systemic inequities in resources and opportunities can negatively impact the development of young children. We look forward to continuing to work with lawmakers to increase the state’s investments in early childhood education and close gaps in development as early as possible.”

The state budget for the upcoming fiscal year that Democratic Gov. J.B. Pritzker signed into law earlier this month includes a $50 million increase in funding for the Early Childhood Block Grant program, enough to serve an estimated 4,600 to 5,800 additional students, according to the State Board of Education. Total funding for the program is now $543.7 million.

This year’s survey was based on teacher observations and measurements of nearly 116,000 students who entered kindergarten in the fall of 2018. During the first 40 days of class, teachers were asked to observe and interact with students and measure their development along 14 different variables that help determine school readiness.

They included such things as the students’ curiosity and initiative in learning; their relationships and interactions with familiar adults and peers; their ability to communicate and use language, even if not standard English; and their basic sense of numbers, math operations and shapes.

Each of the 14 variables relates to one of the three developmental areas that help teachers assess whether students are ready for kindergarten.

Students from lower-income backgrounds — those who qualify for free or reduced-price meals — were only about half as likely to show readiness across all three areas as their wealthier peers: 18 percent for poorer students compared to 34 percent for wealthier students.

The report also showed significant racial and ethnic disparities. Only 15 percent of Hispanic students and 22 percent of black students demonstrated readiness across all three categories, compared to 32 percent of white students, 33 percent of Asian students and 34 percent of Pacific Islander students.

The most common area of deficiency was math readiness, according to the report. Only 33 percent of students showed school readiness in math, compared to 46 percent in language and literacy development and 53 percent in social and emotional development.

The State Board of Education provides a list on its website of suggested activities families can engage in such as reading and writing together, counting and sorting things around the house and supporting adult-child relationships that can help prepare toddlers for kindergarten.