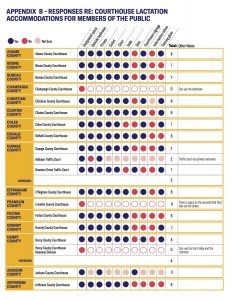 SPRINGFIELD — Illinois county courthouse compliance with a law requiring them to provide nursing mothers access to a private room has so far been “decidedly mixed,” an analysis found.

The state’s chapter of the American Civil Liberties Union called 77 facilities to assess their implementation of a 2018 statute which mandates circuit courthouses to offer a lactation room. It was to be fully enforced by June of this year.

At a minimum, those spaces should have a chair, table and electrical outlet, according to the law. A sink with running water should be provided “where possible.”

Almost 20 facilities across the state lack a designated space, the report found. In 11 courthouses, parents are told to pump breast milk in a restroom, the sanitary condition of which could contaminate the milk. And another 14 buildings had an area that did not meet the statute’s requirements.

At the time lawmakers were considering the initiative, they heard stories about the spaces new mothers were offered when courthouses did not have a lactation room. One lawyer who was participating in a trial in the Jackson County Courthouse said she had to express breast milk in her car during breaks. Another said she was told the only option at the McHenry County Government Center, aside from a bathroom, was the building’s cafeteria facing the wall.

“When this law was passed it was done with the understanding that this reasonable step recognized the realities working mothers faced in struggling to balance their civic responsibilities and duties as parents,” Democratic Sen. Elgie Sims, from Chicago and one of the statute’s chief sponsors, said in an email. “It is critical that all county courthouses comply with this fair and cost negligible law.”

Emily Werth, an ACLU staff attorney, said despite the “shockingly disappointing number” of courthouses out of compliance, the several courthouses “doing quite well” — those that had a private lactation room with the mandated amenities, as well as staff members educated about that space — prove the law’s requirements can be met.

“They show it’s very much doable. It’s just about every county taking the time and putting the resources in to making it work,” she said. “We expect and hope that some of [those courthouses not fully compliant] will respond in good faith to this moment of public education, and finally invest in designating, and making sure personnel know about, that lactation space.”

The report ranked county court buildings by granting them one point each for every yes-or-no question asked.

Courthouses in five counties scored almost perfectly in the analysis — one each in Clinton, Macon, Monroe and Rock Island Counties, and nine in Will County. Facilities in another 22 counties had the next highest scores.

Werth said it is not clear who bears responsibility for the 23 counties that failed to meet the law’s basic requirements.

The Supreme Court oversees general rulemaking for courthouses across the state, but a spokesperson said individual counties are culpable in this case because they are charged with funding those facilities.

Rep. Kelly Cassidy, a Democrat from Chicago and one of the law’s sponsors, said while “there’s nothing explicit in the law saying, ‘if you don’t do this, this agency has the power,’” the Illinois Department of Human Rights can get involved.

The ACLU did not include Cook County courthouses in its analysis due to ongoing litigation. The group is “pursuing claims under the Illinois Human Rights Act based on the denial of access to lactation accommodations,” according to the report.

A spokesperson for the Civil Liberties Union said its goal in compiling the report was to “give people an update on where this is, and to show people best practices for making improvements.”

He added that “if we get another six months or a year down the road and there are still issues, we will look at a whole range of remedies, including [the law’s] enforcement mechanism.”

On the legislative side, Sims said he is “looking into next steps to address the matter” of courthouse compliance.

“Fundamentally, I’m grateful to the ACLU for doing our work and providing the opportunity to be proactive about pressing these counties to actually comply,” Cassidy said.