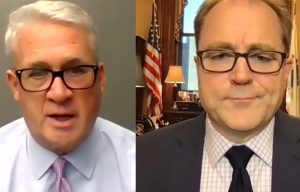 Debate of an economic equity bill backed by the Illinois Legislative Black Caucus was cut off after about 45 minutes Monday night Jan. 11, and several major pieces of legislation — including a sweeping criminal justice overhaul — were expected to be heard well into the night Tuesday, Jan. 12.

Durkin also criticized House Democratic leadership for imposing strict rules on public access to the Bank of Springfield Center, where the Illinois House of Representatives has been conducting legislative session since Jan. 8.

Currently, no members of the public are allowed to view House or Senate proceedings in person, and a limited number of media are allowed into the chambers to cover legislative action at any given time.

“It’s very unfortunate that the lack of accessibility of not just the media but also the general public is taking place, and it goes against our democracy,” Durkin said.

Witnesses at public committee hearings are also limited and have been giving testimony remotely in the House. While the changes are in place to prevent the spread of COVID-19, Durkin suggested House leadership has other reasons for the strict rules.

“It’s because the majority party is fractured and wants to keep things as under the rug as possible,” Durkin said.

Durkin’s comments come as House Democrats struggle to rally around a single candidate for speaker of the next General Assembly, which begins Wednesday, Jan. 13.

Madigan, who has been speaker for all but two years since 1983, suspended but did not withdraw his candidacy Monday, while Emanuel “Chris” Welch, D-Hillside, declared he would also be seeking the speaker’s gavel.

Welch joined Democrats Ann Williams of Chicago and Stephanie Kifowit of Oswego as the declared candidates in the race, although reports surfaced that Kifowit had dropped out of the race Tuesday.

A representative needs 60 votes in order to be named speaker, a level of support no candidate appeared to have Tuesday, although private wrangling of support was ongoing. There are 73 Democrats and 45 Republicans that will be seated in the next General Assembly.

Durkin put to rest rumors that a Democrat may receive Republican support in a bid to unseat Madigan, noting he expects to receive all 45 GOP votes for speaker. An official vote is scheduled to take place when the new General Assembly is sworn in Wednesday.

Durkin said that although Madigan’s next term is uncertain, he accused the speaker of exercising his power to steer legislation before the end of the lame duck session.

Durkin said a Black Caucus-backed bill affecting the state’s procurement code was an example of Democratic leadership passing items through without sufficient input. He said the bill, which creates additional diversity requirements for state contracts, has broad implications on the cost of governance, but Democrats bypassed a Republican request for research on the fiscal impacts.

Durkin also criticized the Democrats’ rush to pass the bill language before new lawmakers are seated and when several current lawmakers will no longer be answerable to voters.

“These bills have been around in some format for a while, but the fact is that they were all amended in the past 24 hours without any input from Republicans, our staff, or anybody who’s going to be affected by them,” Durkin said

“We’re not doing this in a manner that actually allows for substantive, full debate that a democracy really deserves,” McConchie said.

“These life-changing decisions about the future of our state should not be made at the 11th hour without robust public input,” he added.

Durkin also criticized Welch as Madigan’s “hand-picked” successor, although Madigan’s spokesman said he would not be making an endorsement in the race.

Welch chaired the special investigative committee which looked into Madigan’s alleged involvement in a bribery scheme with utility giant Commonwealth Edison. The committee disbanded in mid-December after meeting just three times in four months. Madigan has not been charged with wrongdoing and denies guilt.

“I consider Chris Welch an extension of Mike Madigan, and we’ve got to break from the past,” Durkin said.