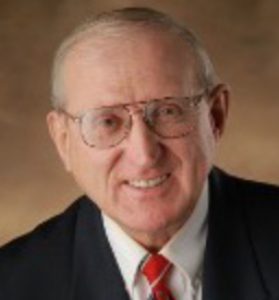 Despite the national and state Republican parties disavowing themselves from him, a white supremacist and Holocaust denier is on his way to being the Republican Party candidate for Congress in Illinois 3rd District.

Arthur Jones, a longtime neo-Nazi, according to the Anti-Defamation League, is the sole Republican candidate for the state’s 3rd District congressional seat.

The ADL notes that Jones has been active in several political parties, including the Anti-Semitic Populist Party, National Socialist White People’s Party, and, for a short time, the American Nazi Party.

Recorded at a National Socialist Movement rally in Kentucky last year, Jones said, “The white majority is fed up with all these lying, cheating, thieving, war-mongering, child-molesting political pimps and whores of the corrupt and decadent two-party, Jew-party, queer-party system.”

In a CNN interview last week, Jones said he has not had anything to do with the Socialist Movement organization on a regular basis for the last 10-15 years.

He said the only group he is part of is his own America First Committee.

“It’s one man, myself, standing for the truth,” Jones said, “and the news media can’t stand that.”

In the interview, he referred to the Holocaust as “an extortion racket by the Jews to bleed, blackmail and extort their enemies.”

“If you did any honest investigation of the Holocaust, you would realize it is nothing more than an international extortion racket,” Jones said.

Jones failed to respond to Chronicle requests for an interview.

Both the Republican National Committee and the Illinois Republican Party have said they do not support the message that Jones spreads.

“The Illinois Republican Party and our country have no place for Nazis like Arthur Jones,” said Tim Schneider, state party chairman. “We strongly oppose his racist views and his candidacy for any public office, including the 3rd Congressional District.”

On his campaign website, Jones said he is running for Congress because he is concerned about the future of our country.

“I am not now, nor have I ever been, a follower of any political party, though I am a registered Republican,” Jones said. “Like most of you, I vote for the man or woman whom I believe to be the best person for the job. In my case, I truly believe I have had the most challenging experiences in my life to prepare me for this office. I know what it is to do hard, honest and dirty work.”

His website also lists “Flags of Conflicting Ideas” and his comments about them: