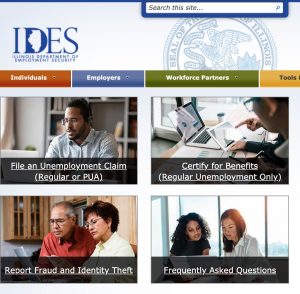 Gov. J.B. Pritzker has maintained for months that the state is doing all it can to increase call center capacity for claims during this time of high unemployment, and has said state’s diminished investment in state agencies caused understaffing at the department. (illinois.gov/ides photo)

SPRINGFIELD — Republicans on Friday, July 24 continued to pressure the Illinois Department of Employment Security to resolve issues stemming from record unemployment claims the same day the state reported another 1,532 confirmed cases of COVID-19.

Five months after Gov. J.B. Pritzker issued his first stay-at-home order in response to the spread of the novel coronavirus, unemployment rates in Illinois remain historically high at 14.6 percent in June, leading to widely reported delays in the Illinois Department of Employment Security’s handling of unemployment claims.

Pritzker has long maintained the state is doing all it can to increase call center capacity, and has said state government’s diminished investment in state agencies caused understaffing at the department to begin with, and finding new specialized call center employees often requires several months of training mandated by the federal government.

In light of news that many Illinoisans were experiencing fraud under the federal government’s new Pandemic Unemployment Assistance program, Illinois House Republicans — joined by U.S. Rep. Rodney Davis, R-Taylorville — made another call to the governor to fix the issues facing the department.

“What we’re asking for now is some hearings, a hearing in particular where we would perhaps have members of IDES, the governor’s office and of course I would like to have someone there from Deloitte,” Rep. Terri Bryant, R-Murphysboro said in the virtual news conference.

Deloitte is the private firm enlisted to build the state’s Pandemic Unemployment Assistance portal to handle claims for those who would otherwise not be eligible for unemployment but now have access to the benefits as part of the federally-funded program passed in response to COVID-19.

The company received no-bid contracts with the state totaling more than $22 million. Once the portal launched, a reported glitch in the system made the personal information of several thousand claimants viewable. Only one person accessed it before it was fixed, according to IDES, which cited viewer logs of the page where the information was viewable.

In an unrelated announcement this week, IDES said several Illinoisans were victims of fraud through the PUA program, which was designed hastily and does not give employers an opportunity to challenge fraudulent claims because the type of workers applying for the benefit do not technically have employers.

According to IDES, the scam involves filing unemployment claims using false identities and then attempting to have the payment method switched from the debit cards that people receive when they qualify for benefits to a direct deposit account to which scammers have access.

On July 6, the FBI reported that, “U.S. citizens from several states have been victimized by criminal actors impersonating the victims and using the victims’ stolen identities to submit fraudulent unemployment insurance claims online.”

If anyone receives a debit card or correspondence on the unemployment claims they have not initiated, they are instructed to call IDES immediately at 1-800-814-0513. When prompted, select the English or Spanish language option, then select option 1 for claimants and option, followed by 5 to report identity theft.

But Bryant said callers to that line are experiencing the same issues as other claimants — long delays on the phone lines, which take information through an automated process and schedule a callback for the claimant or person reporting fraud. Often those callbacks don’t happen for several days, according to reports.

Multiple readers reached out to Capitol News Illinois reporting delays when they tried to call to rectify fraud or file claims. Rep. Dan Ugaste, R-Geneva, said his mother-in-law, who recently passed away, received a fraudulent debit card in her name on the day of her funeral.

“I want to start with hearings, in public, where we can question agency officials and get to the bottom of the failed response, and the data breach and fraud, and make sure something like this can never happen again in Illinois,” Butler said.

Meanwhile, the state’s seven-day rolling positivity rate for COVID-19 tests remained at 3.4 percent Friday after four days of increasing. The 1,532 new cases reported were among 44,330 test results reported, making for a one-day positivity rate of 3.5 percent.

Hospitalizations remained roughly level near their pandemic lows, with 1,471 COVID-19-positive patients in hospital beds, including 325 in intensive care unit beds and 115 on ventilators.

The state announced an additional 19 deaths, bringing the total casualties since the pandemic began to 7,385 among 168,457 confirmed cases. More than 2.4 million tests have been conducted.