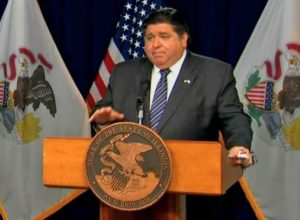 Gov. J.B. Pritzker speaks during a news conference Wednesday, Oct. 14 in Chicago to provide an update on the latest COVID-19 statistics in Illinois. The governor said Illinois’ numbers are indicating a “concerning direction.” (blueroomstream.com)

SPRINGFIELD — The U.S. Supreme Court ruled on Tuesday, Oct. 13 the Trump administration could shorten the U.S. Census count, just hours after the Illinois government committed an additional $1 million to outreach.

The Trump administration originally tried to shorten the end date of the census to Sept. 30, but federal courts mandated the administration keep the count going until Oct. 31, the extended deadline originally set by the federal government in response to the coronavirus pandemic. However, following the 7-1 SCOTUS ruling, the U.S. Census Bureau announced it was ending the count at 5 a.m. Friday in Illinois.

The Census Bureau will continue to accept self-responses from Illinoisans online at My2020Census.gov through that 5 a.m. deadline and will accept phone responses and paper forms postmarked by Oct. 15.

Gov. J.B. Pritzker tweeted about the ruling shortly after its announcement, calling the decision “wrong” and saying it could lead to “an undercount in communities that can least afford it, perpetuating generations of disinvestment that make our nation weaker.”

Enumeration, or the total rate of households being counted in the census, is currently at 99.9 percent for the U.S. and Illinois, according to the Census Bureau. However, census outreach advocates say that the self-response is a more reliable measure for an accurate count.

“It’s not an exact science,” said Anita Banerji, director of the Democracy Initiative at Forefront, which conducts census outreach in Illinois.

According to Banerji, multiple factors and situations can affect enumeration tallies conducted by census agents. People living in nursing homes, college campuses and prisons can skew totals. The coronavirus pandemic has displaced families and killed thousands in Illinois over the course of the census count.

“Getting to that 99 percent when you think about all the different challenges we’ve had, it’s not an exact number,” Banerji said. “So for all intents and purposes, we as advocates focus on the self-response number because we know that to be more of a tried and true number.”

In a release distributed Oct. 13 before the SCOTUS ruling, the Pritzker administration announced it had spent an additional $1 million through the Illinois Department of Human Services for “census-related media outreach in communities of color across the state” to encourage more households to fill out self-response forms for the census.

According to that release, “many underserved and marginalized neighborhoods and cities are hovering between a 40-50 percent participation rate,” which puts hundreds of millions of federal dollars at stake over the next 10 years. Funds that could go toward programs to assist those traditionally underserved and marginalized communities in Illinois that aren’t getting counted.

While the $1 million expenditure was meant to propel outreach for the last two weeks, IDHS officials said operations to conduct outreach over the next two days are underway and that all money has already been spent.

By law, the Census Bureau must report the results of the census to the president by Dec. 31. According to Banerji, that’s a process that normally takes five to six months to make sure the data is accurate.

With less than three months from the end of the count to when the bureau must submit that first report, Banerji said compiling data from self-response is much easier for the bureau to confirm its accuracy than data collected by census agents in non-response follow-ups.

Advocates, lawmakers and government officials across the state and the country have been imploring residents to fill out self-response forms as soon as possible before the impending deadline.

“The new census count ends tomorrow,” Pritzker said at a news conference Wednesday, Oct. 14. “The time to fill it out if you haven’t already, is right now. The time to encourage your friends and neighbors to get counted is right now, pick up your phone and go to my2020census.gov, or call 1-844-330-2020. It takes less than 10 minutes. Make your voice heard by getting counted.”