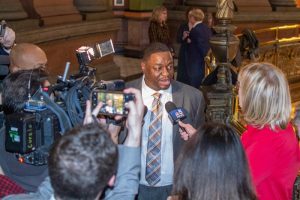 SPRINGFIELD – State Sen. Emil Jones III has been charged in federal court with three criminal counts tied to his dealings with a red light camera company.

Jones, a Chicago Democrat, is the son of former Senate President Emil Jones Jr. The younger Jones has served in the Senate since 2009 following his father’s retirement. He is deputy majority leader and chairs the Committee on Licensed Activities.

He also is on the ballot for reelection in November and does not have an opponent.

According to the charging document, Jones later agreed to limit the scope of any such study to cameras operated only inside the city in exchange for payments to himself and an unnamed associate from someone identified only as “Individual A,” who had an ownership interest in a red light camera company that did business with municipalities outside Chicago.

Prosecutors allege that from April through September 2019, Jones solicited and agreed to accept a $5,000 payment from Individual A, as well as an unspecified payment and a job to the associate identified as “Individual B.”

Senate records indicate the bill passed out of the Transportation Committee on Nov. 12, 2019, but was never voted on by the full Senate.

Jones is also charged with arranging the deal through interstate commerce by using a Google email account. And he is charged with lying to federal agents during their investigation of the matter.

He agreed to cooperate with a continuing investigation in exchange for delayed sentencing. He died in December 2020 of complications from COVID-19 and never served time in prison.

Senate President Don Harmon, D-Oak Park, issued a statement Tuesday calling for Jones to step down from his leadership position and committee chairmanship, but stopping short of asking for his resignation from office.

“These are grave allegations,” Harmon said in the statement. “Members of the Senate and all public officials need to hold themselves to a high ethical standard for the public to have trust and faith in our work.”

“The Democrat Party of Illinois has become an organized crime family whose only purpose is to shake down Illinois taxpayers,” Durkin said. “Today’s indictment once again shows Illinois residents why Democrats refuse to pass real ethics reform; they are too corrupt.”