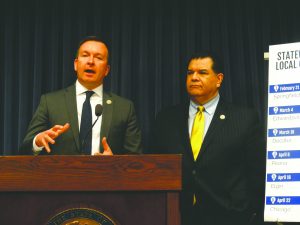 Sen. Andy Manar, D-Bunker Hill, speaks during a Feb. 21 news conference at the Capitol in Springfield. Two bills sponsored by Manar were passed by the Senate on May29 that would raise the minimum annual salary for a public school teacher in Illinois and remove the requirement that prospective instructors take a basic skills test. Pictured in the photo with Manar is Sen. Martin Sandoval, D-Chicago. (Photo by Peter Hancock/Capitol News Illinois file)

SPRINGFIELD — A pair of bills aiming to address the state’s teacher shortage passed the Illinois Senate on May 31.

Both bills were sponsored by Sen. Andy Manar, a Bunker Hill Democrat.

The state’s current minimum teacher salary law of $10,000 has been unchanged since the 1980s.

The bill also directs a professional review panel — established as part of an education funding overhaul in the previous General Assembly — to report on how the evidence-based funding model will be affected by the increased costs incurred by districts as part of the minimum wage increase. Manar said the panel will look for ways the state can “bridge the gap” on increased costs for those districts.

Senator Jason Barickman, a Bloomington Republican who helped advance the evidence-based model, said he thought the added expense to districts could affect the model and cause districts that cannot afford the wages to raise property taxes. He voted against the measure.

The minimum wage bill passed 45-13 and will require a concurrence from the House before going to Gov. J.B. Pritzker.

The Senate also passed and sent to Pritzker a bill intended to address the state’s teacher shortage.

Senate Bill 1952 would eliminate the current requirement that prospective teachers take a “test of basic skills” prior to the start of their student teaching. It also allows for new teachers, under certain conditions, to be reimbursed for the cost of taking a teacher performance test, known as the edTPA exam.

It also removes a current prohibition against student teachers being paid for their work while also raising the cap on annual teacher pay raises to 6 percent instead of 3 percent.

The House had made a minor change to the bill, but the Senate concurred in that change Wednesday, sending the bill to Gov. Pritzker.