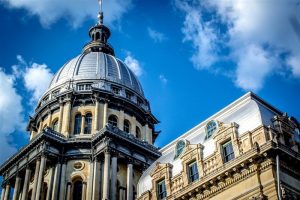 SPRINGFIELD — The Senate Health Committee voted Tuesday, May 11 to advance two bills which would create a prescription drug repository program and require that feminine hygiene products be provided free of charge at homeless shelters.

Both bills have already passed the House and will now be considered before the full Senate.

House Bill 119 would establish a prescription drug repository program, allowing certain unused prescription drugs to be returned to pharmacies and reused for eligible populations. The bill would allow individuals to return unexpired prescription and over-the-counter medication which remains in unopened, tamper-evident packaging.

Unused medications could be returned by individuals at participating pharmacies, and prescription donors would be required to provide information regarding the strength and quantity of each donation.

“Instead of medication ending up in landfills, this would create an opportunity for there to be relief for Illinoisans who are struggling to afford their medication,” chief Senate sponsor Karina Villa, D-West Chicago, said during a May 11 committee hearing.

Villa said the program allows for collection of “safe, unused, unexpired” medications which can then be made available “at a minimal cost to patients.”

George Wang, co-founder of the nonprofit organization SIRUM, or Supporting Initiatives to Redistribute Unused Medicine, told the committee that through this program, unused prescriptions could be sent to other charities or community health organizations to assist vulnerable low-income patients and those in need of low-cost prescriptions.

“Typically, what happens in these programs is that the medicine would be donated to a charitable pharmacy and perhaps a free clinic, and then that entity would dispense the medicine,” Wang said.

Villa said the bill would make Illinois one of more than 20 states to provide a prescription drug repository program.

“This piece of legislation is such a critical opportunity in the state of Illinois where we can take medication that is unused, instead of going to the landfills, and putting it in the hands of those who need it the most,” Villa said. “We have many folks who could really use this opportunity, so I really want to thank all of those folks who have been working so hard.”

The bill passed by a unanimous 13-0 vote and will be sent to the Senate floor.

The Senate Health Committee on May 11 also passed House Bill 310, which would require homeless shelters to provide feminine hygiene products.

The bill would require that products such as sanitary napkins, tampons and panty liners be made available for free at all shelters that provide temporary housing assistance to women and youth.

It applies to public and private shelters, but the shelter’s obligation to provide the products is “subject to the availability of funds in the homeless shelter’s general budget.”

“There is no excuse for depriving any individual the right to basic hygiene,” chief Senate sponsor Christopher Belt, D-Centreville, said on May 11. “Not providing for such an essential need to some of our most vulnerable citizens is shameful and should no longer happen in Illinois.”

“This puts something very important on people’s radar screens, because we think of donating food or clothing, but this is also going to open people’s minds to donating these feminine products,” Fine said.

“All of us as women have been in a position where we’ve been begging, our friends and neighbors to look in their purses to see if they have anything available to us because it could be a very embarrassing uncomfortable situation, and just another challenge that if you are homeless, you don’t need another challenge in your life,” Fine added.

The bill passed by an 11-2 vote and will be sent to the full Senate for consideration.