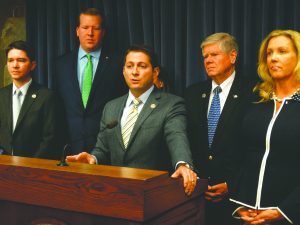 A group of Senate Republicans led by Sen. Jason Barickman (center) discuss their bill to strengthen the office of legislative inspector general during a Statehouse news conference Oct. 30 at the Capitol in Springfield. Barickman is flanked by (from left) Republican Sens. Steve McClure, of Springfield; Jason Plummer, of Edwardsville; Jil Tracy, of Quincy; Jim Oberweis, of Sugar Grove; and Sue Rezin, of Morris. (Photo by Peter Hancock/Capitol News Illinois)

SPRINGFIELD — Republicans in the Illinois Senate unveiled a bill Oct. 30 that would give the legislative inspector general independent authority to launch investigations and issue subpoenas, something that previous inspectors general have also urged.

Senate Bill 2297 was introduced Wednesday by Sen. Jason Barickman, R-Bloomington, and 17 other Republicans.

“I believe the people of Illinois want us to relinquish the control that the Legislature has to police the actions of their colleagues who may have committed wrongdoing,” Barickman said during a news conference at the Capitol. “We can do this by giving two important powers to the office of the legislative inspector general, which will bring independence to that office.”

Barickman was joined at the news conference by several other Senate Republicans who said recent scandals – including federal criminal charges filed recently against two sitting lawmakers – prove the General Assembly is incapable of policing itself.

“In this state, the public has very good reason to be suspicious of the process that puts that much power in the hands of the people who have demonstrated a history of abusing power,” said Sen. Jil Tracy, of Quincy. “We are proposing to take politicians out of the equation and give the legislative inspector general the independence necessary to do his or her job.”

The inspector general’s office was established in 2003. It receives and investigates complaints about official misconduct or abuse of authority by members of the General Assembly and legislative staff.

Under current law, however, the inspector general must get permission from a group of lawmakers known as the Legislative Ethics Commission to launch any investigation, other than those involving sexual misconduct. It also must get legislative approval to release any report.

In April, the Chicago Tribune published an op-ed by former interim Inspector General Julie Porter, who described the office of inspector general as “broken” because it has no independent authority to act and that the lawmakers who serve on the oversight panel “have inherent conflicts of interest in serving on the commission.”

She also accused the commission of burying a report of alleged misconduct by a lawmaker.

Porter’s temporary term expired in February and she was replaced by Carol Pope, a former judge and prosecutor from central Illinois.

The Senate Republicans’ bill was just the latest in a spate of proposed ethics reforms lawmakers from both parties have put forward in the wake of a wide-ranging federal probe of public corruption involving prominent Chicago-area Democrats.

Rep. Luis Arroyo, D-Chicago, an assistant majority leader in the House, was charged in federal court Monday with one count of bribery for allegedly offering to pay a state senator $2,500 per month for six months to a year in exchange for the senator’s support of a bill that would authorize regulation and taxing of electronic sweepstakes machines, according to an affidavit filed in federal court.

Democratic House Speaker Michael Madigan announced Tuesday that he had authorized a six-member investigative committee, made up of equal numbers of Democrats and Republicans, to look into the allegations against Arroyo. That committee is scheduled to have its first meeting Friday, most likely in Chicago, according to a Madigan spokesman. The speaker said the formal process could lead to Arroyo’s ouster. He and others have called on Arroyo to resign.

Meanwhile, Sen. Tom Cullerton, a distant cousin of the senate president and a Villa Park Democrat, faces multiple charges of embezzlement. Cullerton was formally accused Aug. 2 by a federal grand jury in Cook County of collecting a salary as well as health and pension benefits from a labor union “for which he did little or no work.” His next status hearing is scheduled for Dec. 5.

Senate President John Cullerton, D-Chicago, who earlier this week called for establishing a joint House-Senate committee on ethics reforms, issued a statement saying, “I welcome their ideas and look forward to working with them and others to get effective results.”