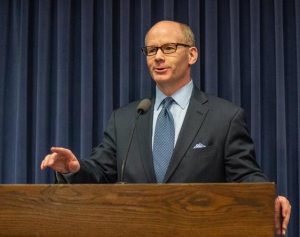 SPRINGFIELD – An Illinois Senate committee will hold its first hearing Wednesday, March 17 to begin the process of redrawing congressional and state legislative districts in line with the 2020 census, despite the fact that detailed census data will likely be unavailable until September.

Senate President Don Harmon, D-Oak Park, said in an interview that despite the delay by the Census Bureau, he expects the General Assembly to complete the process before the June 30 deadline set in the state constitution.

“Well, the delay in the census data is certainly a new challenge, in a year full of challenges. But we’re prepared to forge ahead with our obligation to draw a map before June 30, as we’re required to do by the Constitution,” Harmon said.

Normally, states would receive the detailed “block-level” data from the Census Bureau in early April following the decennial census, but the process was delayed in 2020, largely due to the COVID-19 pandemic.

Under the Illinois Constitution, if lawmakers fail to approve new maps by June 30, the process is automatically handed over to an eight-member, bipartisan Legislative Redistricting Commission. That panel would then have until Aug. 10 to produce maps that have the support of at least five members. If it fails to meet that deadline, one more person would be chosen at random from a preapproved list to serve on the commission and the deadline would be extended to Oct. 5.

Harmon, however, said he does not believe that will be necessary, and the first committee hearing will feature testimony from the National Conference of State Legislatures about how other states are approaching the challenge.

“We know other states are getting started with their redistricting process as well, Iowa is kicking off their process,” he said. “Oklahoma seems to be a little bit ahead of us. Oklahoma evidently has announced that it’s going to begin using the 2019 estimated data from the American Community Survey, which in the past has been a fairly reliable predictor of what the final census data will look like.”

Besides the late census data, Illinois faces other redistricting challenges this year, starting with the fact that due to declining population, Illinois is likely to lose one of its 18 U.S. congressional districts.

Harmon said he couldn’t say which part of the state would be affected by the loss of a congressional seat because officials don’t yet have detailed data to show precisely where the population shifts occurred. But he said the process is “more nuanced” than merely collapsing one district and absorbing that territory into other districts.

“It’s not that one district just disappears,” he said. “No matter how many districts we have, we will try to build districts that reflect the communities of interest and apportion the people of Illinois into the 17 or 18 districts that will have.”

Another challenge is that although the process of drawing legislative districts is inherently political, and there is a long tradition of majority parties of using their advantage to draw maps to protect themselves, Democratic Gov. J.B. Pritzker has vowed that he will not sign off on any maps that are unfairly gerrymandered.

“We are planning to prepare a fair map that reflects the diversity of our state and provides for fair and equal representation to the very best of our ability,” Harmon said.

Harmon said the General Assembly plans to hold a series of as many as two dozen public hearings throughout the state to take input from residents of all 102 counties on how they think maps should be drawn.

“We’re also for the first time ever going to create an online portal and give Illinois residents the tools to jump online and draw their own legislative districts for submission to our committee,” he said.

“It is always a challenge to make sure that we provide for fair and equal representation of all communities,” he said. “That’s why we’re embarking on this robust series of hearings. We want to make sure that anyone in Illinois who wants to chime in on the redistricting process is able to do so. We want to hear from all stakeholders, all communities of interest so we can better fashion a map that fully and fairly represents the communities of Illinois.”

The Senate Redistricting Committee includes 12 members and will be chaired by Sen. Omar Aquino, D-Chicago. Sen. Jason Barickman, R-Bloomington, serves as the Republican spokesperson. The committee is also broken up into 15 subcommittees, each focusing on different regions of the state.

The House Redistricting Committee, chaired by Rep. Elizabeth Hernandez, D-Cicero, has not yet scheduled its first meeting.