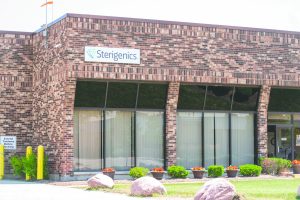 Sterigenics, a medical supply sterilization company in Willowbrook, has been closed since it was barred in February from using ethylene oxide. But a pending settlement agreement between the company and the state could pave the way for Sterigenics to reopen. Sen. John Curran (R-Downers Grove) has filed a bill that would ban emissions of the known cancer-causing gas and, he hopes, prevent Sterigenics from reopening. (Capitol News Illinois photo by Jerry Nowicki)

SPRINGFIELD — A suburban state senator filed legislation Tuesday, July 30 that would ban emissions of a known cancer-causing gas in Illinois by 2022. It also, he hopes, would decrease the likelihood that a Willowbrook medical supply sterilization company linked to increased cancer rates in its surrounding area would ever emit the chemical again.

The gas is ethylene oxide, to which chronic exposure can cause increased cancer risks, reproductive effects and other major medical problems, according to the U.S. Department of Labor. The senator is John Curran, a Downers Grove Republican who filed Senate Bill 2264, which would ban emissions of ethylene oxide in most manufacturing processes aside from medical supply sterilization by 2021, then entirely by 2022.

The bill is the latest development in a high-profile legislative and judicial effort by Curran and other lawmakers and activists to prevent Sterigenics, a medical supply sterilization company that emits ethylene oxide, from reopening in suburban Willowbrook.

“Sterigenics should not be allowed to reopen,” Curran said. “This facility has been leaking dangerous levels of ethylene oxide into the area for decades, and there has been zero accounting for the damage that they have already done.”

Sterigenics has been barred from using ethylene oxide since February, when the Illinois Environmental Protection Agency placed a seal order on its use of the gas as the public pushed back against the facility and reports continued to surface of increased cancer risk in the area by up to 10 times the normal rate.

But a pending settlement agreement between the company and the state could pave the way for Sterigenics to reopen. That agreement, known as a consent order, is between the company, Illinois Attorney General Kwame Raoul and DuPage County State’s Attorney Robert Berlin. A court decision on whether the agreement can move forward is scheduled for Sept. 6.

If approved, it would allow Sterigenics to reopen, provided the company installs equipment that puts its emissions in line with standards laid out in the agreement and a new law which Curran helped pass earlier this year. These regulations require companies to capture 100 percent of all ethylene oxide emissions within the facility and reduce ambient ethylene oxide emissions to 0.2 parts per million.

Under the agreement, Sterigenics would be allowed to release only 85 pounds of ethylene oxide per year, down from an allowance of more than 36,000 pounds annually from a previous permit.

Curran and Republican state Reps. Jim Durkin, the House Minority Leader from Western Springs, and Deanne Mazzochi of Elmhurst, have filed a brief in that legal proceeding to oppose the reopening of Sterigenics.

Curran said he would continue to oppose the consent order in court, but would also aim to advance his legislative fix. His office said the new bill provides a “strong financial disincentive” for Sterigenics to reopen, as the company would have to spend millions of dollars to bring its emissions in line while being allowed to operate for less than three more years.

“I always preferred a complete ban on ethylene oxide emissions,” Curran said, noting he had sponsored similar legislation previously without much traction.

He said Senate Bill 1852, which laid out the stricter emissions regulations, was “a great improvement for the safety of my constituents” and the “best bill I could pass at the time.”

“But my ultimate goal is to prevent the emission of this chemical into the atmosphere,” he said.

Curran said public outcry over the proposed consent order, combined with recent public statements from Democratic Gov. J.B. Pritzker, could create a new political reality to pave the way for an outright ban.

Earlier this month, Pritzker said in a statement that he would sign any measure “up to and including a ban, on the use of ethylene oxide in the state of Illinois,” and, if Leader Durkin requested it, call a special legislative session to discuss new ethylene oxide legislation. His office did not immediately respond to questions Tuesday as to whether a special session would be called in response to Curran’s legislation.

But Curran said he is “ready to go” with his new ethylene oxide ban should the special session become a reality.

“I am grateful that Governor Pritzker has offered to call a special session to deal with this issue and that he has clearly stated that he supports a ban on the use of ethylene oxide,” Curran said.  “The governor has proven that he is able to use his position to push through major legislation and I look forward to working with him to advance this bill.”

In a release from Curran’s office Tuesday, Berlin, the DuPage County state’s attorney who filed the consent order along with Raoul, thanked Curran for bringing the new bill forward.

“The only way to guarantee the residents of Willowbrook and the surrounding communities clean air that is free of ethylene oxide today, tomorrow and for generations to come, is to completely eliminate the source of the contamination,” Berlin said in a news release.