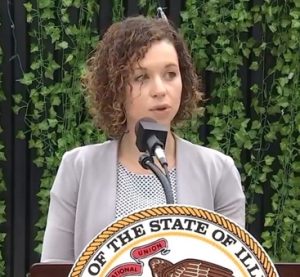 Illinois Department of Commerce and Economic Opportunity Director Erin Guthrie speaks at an outdoor news conference in 2020. She spoke to Capitol News Illinois Friday, Jan. 8 about the end of the state’s Business Interruption Grant Program. (Blueroomstream.com)

SPRINGFIELD — The grant program for small businesses owners in Illinois who suffered losses during the pandemic has run out of money.

Illinois’ Business Interruption Grant program was the largest state program of its kind, but only about 20 percent, or 8,974 applicants, received a grant.

The Illinois General Assembly created the program using federal Coronavirus Aid, Relief and Economic Security Act, or CARES Act, money. The Illinois Department of Commerce and Economic Opportunity helped administer the program, and awarded more than $275 million since the first round of grants were issued in August.

DCEO Director Erin Guthrie said this particular set of federal dollars has been exhausted, but the department continues to look for ways to help businesses statewide.

“We know that businesses are hurting and we wish that Congress would provide more relief,” Guthrie said in an interview Jan. 8. “This virus has shut down so much of our economy, and that is a struggle for every person and business across our state. The other thing I would say is, we’re constantly working with our federal counterparts, with other sources in ways that we can creatively provide relief to those businesses.”

She said government money is still available for business owners through the second round of the federal Paycheck Protection Program, which awards forgivable loans, as well as existing state loan programs dedicated to small businesses, such as Advantage Illinois.

“(Gov. J.B. Pritzker’s) decision to respond quickly to the virus, and also support, economically, our workers and our businesses has been key in getting this all done. That’s the big picture. It’s really coming down from the top. It’s really coming from his vision and carrying it out in an equitable way,” Guthrie said.

Although the supply of funds could not match the demand, Guthrie said the agency continued to solicit for new applications because “we knew that we would continue to get those smallest, very smallest businesses to apply who were in the hardest hit industries, and that’s exactly what happened.”

Robert Gomez, owner of Subterranean music venue in Chicago, received funding through the BIG Grant program in mid-November after shuttering his doors in March.

Gomez said Subterranean was in a dire situation before it received a $30,000 program grant, as he weighed the possibilities of refinancing his home, or tapping into his kids’ college funds.

Subterranean, which is in its 27th year, received federal PPP money but Gomez said he hasn’t touched the funds because his workers are not on his payroll, which is a required for loan forgiveness eligibility.

“We’ve had to rely on donations from individuals, and a gift certificate program that we put in place where people can redeem it later,” he said.

“It’s like, no, we can’t go down like this. You work so hard to build something for almost 30 years, and then get wiped out because of the pandemic. It’s so hard to wrap my mind around that. But our only alternative, my only alternative, was to fight, to get creative, to push,” Gomez said.

Having spent his BIG funds, Gomez said he plans to apply for grant money that was allocated for venue operators in the second round of federal COVID-19 stimulus funding, which was passed by Congress in December.

“Thankfully, there seems to be a federal program that is specific for venues that would be the lifeline we need. But without the BIG grant, we wouldn’t have been able to sustain ourselves without some major financial overhaul,” Gomez said.

Nearly half of all BIG funds, or more than $133 million dollars, went to restaurants and bars, according to the DCEO release.

Pritzker’s executive order that imposed an indoor dining ban on bars and restaurants, effective Nov. 18, has been especially painful for the industry.

Pat Doerr, managing director of the Hospitality Business Association of Chicago, said the fact that the agency awarded some grants to restaurants that never stopped serving customers indoors, in violation of the program’s eligibility rules, is one of his top grievances.

For example, Fireside Grille in Sugar Grove has continued to operate indoor dining after the governor issued his executive order but was issued a $150,000 grant.

Owners of Fireside Grille did not respond to requests for comment.

A DCEO spokesperson said the department hasn’t received a formal complaint about Fireside Grille, adding that DCEO will be reaching out to this business owner to inquire.

Guthrie said the majority of grant recipients have followed the rules.

“If they aren’t, we really try to work with grantees to get them back in compliance. And then the very last line of defense would be to potentially claw back funds,” she said.

Guthrie said the department hasn’t clawed back any grant funds so far but one grant recipient that was not in compliance voluntarily returned their funds.

Doerr said the agency also failed to communicate an applicant’s realistic chance of getting money.

“They massively oversold the program,” he said. “The ship went down, and only one in five businesses got a lifeboat. Everybody’s happy for the one in five small businesses who made it in the lifeboat.”

Matt Strauss applied for BIG funds to help his Chicago restaurant — Table, Donkey and Stick — and Danke, a Chicago sandwich shop, where he is a managing member, but was denied funds for both businesses.

He said his businesses have remained afloat with PPP funds, and expects they will receive a second round of federal PPP money in the coming weeks.

“The bottom line is (DCEO) should have taken applications, determined eligibility, and then distributed funds across the pool — the full universe of eligible applicants. It’s the only way to do it equitably,” he said.

“Obviously, everyone wants free money. And I wouldn’t say no, but I just know that there are thousands and thousands of businesses that are owned by people who have less than I have, and are probably going to struggle significantly because they didn’t get any funding.”