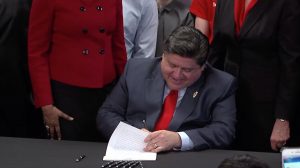 Gov. J.B. Pritzker on April 7 signs into law a bill that raises to 21 the minimum age people can legally buy tobacco products in Illinois. Pritzker signed the legislation at the Mile Square Health Center in Chicago. (Screen shot from BlueRoomStream)

SPRINGFIELD – Starting Monday, July 1, it will officially become illegal in Illinois for anyone to sell or provide tobacco cigarettes or other tobacco products to people under age 21.

The so-called “Tobacco 21” bill, House Bill 345, which Gov. J.B. Pritzker signed into law April 8, is one of several new laws that will take effect on July 1, the start of the new state fiscal year.

It prohibits anyone from selling or providing cigarettes, electronic cigarettes or any other “alternative” tobacco product to a person under age 21.

Both Illinois and Virginia passed Tobacco 21 laws this year, making them the seventh and eighth states to have such laws in effect, according to the Campaign for Tobacco-Free Kids. The others are Hawaii, California, New Jersey, Oregon, Maine and Massachusetts.

Illinois lawmakers passed 599 bills during the spring 2019 session. Of those, as of Wednesday, only 27 had been signed into law.

The Illinois Constitution provides that the governor has 60 days from the day he receives a bill from the General Assembly to either sign or veto it. Many of the 599 bills passed this session have not yet been delivered to the governor’s office.

Lawmakers have the discretion to set the effective date of any new law on any date they choose. The constitution, however, says any bill passed after May 31 of a given year cannot take effect until June 1 of the following year, unless an earlier date is approved by three-fifths majorities in both the House and Senate.

Bills passed before June 1 that do not provide an effective date become law on Jan. 1 of the following year, or on the date the governor signs them, whichever is later.

Also starting July 1, a new law takes effect that will have an impact on public school students, although most of them won’t notice it until school resumes in the fall. Senate Bill 28 reinstates the “five clock-hour” rule, which requires a “school day” to include at least five clock hours of instruction.

That had been the law for many years in Illinois, but it was inadvertently omitted when lawmakers overhauled the state school funding system, creating the evidence-based funding formula in 2017.

July 1 also marks the date when people who provide various kinds of services for children on behalf of the Department of Children and Family Services will get a 5 percent raise in their reimbursement rates. That was part of the budget implementation bill, Senate Bill 1814, and it represents the first such increase they have seen in several years.

Many of the bills Gov. Pritzker has signed have already gone into effect because the bills contained immediate effective dates.

For example, mayors can now perform marriages in Illinois. That was enacted in House Bill 2841, which also extends the same authority to presidents of cities, villages and incorporated towns. Pritzker signed that new law June 14.

Many local governments lost some authority, however, on April 19. That was the day Pritzker signed Senate Bill 2988, which strips townships of the authority to regulate the placement of wind farms outside of an incorporated city’s zoning area. That bill came in response to a dispute in Douglas County, in eastern Illinois, where two townships sought to block development of a large-scale wind farm.

Right to work laws prohibit people from being required to join a union as a condition of employment. Senate Bill 1474 came in response to an ordinance passed by the village of Lincolnshire, in northern Illinois, in 2015.

Another bill that has already taken effect expands the ability of workers, their families or their estates to file claims for damages that result from exposure to toxic substances. Previously, workers had a defined period of time in which to file those claims, known as a “period of repose.” That prevented many workers from filing claims for occupational diseases such as mesothelioma, a cancer that results from asbestos exposure, that don’t become known until long after the deadline had passed.

Senate Bill 1596, which Pritzker signed May 17, provides that those conditions are no longer subject to any repose provisions.

A number of other bills enacted this year do not take effect for some time.

For example, a tax amnesty program is set to begin Oct. 1 and run through Nov. 15. During that time, people who owe back taxes to the state can pay off those debts and avoid having to pay interest and penalties.

That was part of Senate Bill 689, which provides revenue to fund the upcoming fiscal year’s budget. The amnesty program is expected to generate about $75 million.

And, most notably, there is the marijuana legalization bill, House Bill 1438, which Pritzker signed into law June 25.

Although the bill has an immediate effective date, that merely allows various state agencies to begin the process of drafting rules and regulations that will govern the licensing of marijuana growers, processors, transporters and retailers. The actual sale and possession of marijuana won’t become legal until Jan. 1, 2020.