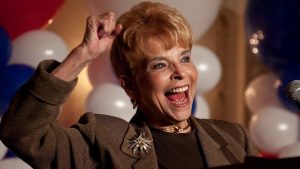 Judy Baar Topinka was not your typical politician and her son wants Illinois school children to know that.

Joseph Baar Topinka, the only child of the former Illinois leader, has written a book “Just Judy,” which chronicles his mom’s life as a public servant. The book is aimed at being a curriculum piece for middle school students.

However, it has plenty of insights for adults, as well, into the first female state treasurer, the first person to hold two constitutional offices in the state and the only person to hold both two financial offices – treasurer and comptroller – in Illinois.

“My mother’s story is a story of a positive role model. It’s about civics, ethics, civility and a love of heritage,” Joseph said. “She tried to be as honest as possible in a dysfunctional system. She tried to be civil to everyone. At the core, she was about good government.”

The author noted that even on Election Night 2006, when she lost to now-convicted Gov. Rod Blagojevich, her campaign manager said, “Judy, you did everything right.” “He knew it, she knew it, everyone knew it. She lost with honor and she persevered,” Joseph wrote. 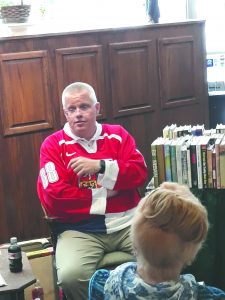 Judy earned a lot of trust from the citizens of Illinois, including those within the Republican and Democratic parties. People could count on her word being her bond, and if she could not keep a promise, she would tell you upfront that she could not make the promise. During phone calls with her son while she was running for governor, Judy used to tell Joe how people offered her campaign donations in exchange for a promise for something in return if she won the election. She would not make those promises and found herself with fewer donations because of that integrity. She told Joe she was not going to encourage the “pay to play” mentality. If people wanted a leader who cared and would try her best, they should donate. If not, then she would lose the election but lose on her own terms.

Joseph, who accompanied his mother, a former journalist who was proud of her Czech and Slovak backgrounds, to countless campaign events and swore her in as state comptroller, said he wants to provide the “starter yeast” for teens to learn about government and public service.

“I want to see the book in every school in Illinois,” he added.

Joseph noted that his colorful and candid mother could not even stick to the script during her Oath of Office as comptroller, stopping him halfway through the piece that he had memorized asking him whether the oath was a little too long.

Judy Baar Topinka died in December 2014, a month after being elected to a second term as comptroller. 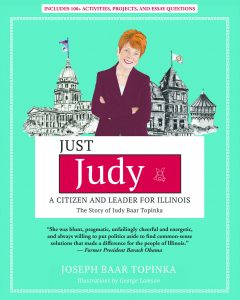 He noted that his mother was no saint, but that in the world of Illinois politics she was better than most.

He noted that the book, available on Amazon and at hiltonpub.com, was a chance to chronicle his mother’s experience in public service.

“The book was a labor of love. The book is a collage of ideas and thoughts with links to discussions,” Joseph said. “It is designed for every student. When they see it, they love it. It is a treasure trove of 40 years of reflections and observations of her life.”