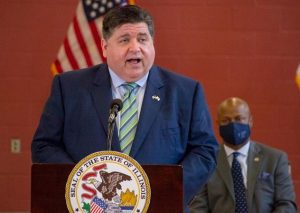 Gov. J.B. Pritzker is pictured during a press event in May in Springfield. On July 8, the governor called the upgrade of the state’s bond rating by S&P Global Ratings a result of his administration “making responsible decisions step by step, day by day, working closely with our partners in state government.” House Speaker Emanuel “Chris” Welch, pictured in the background, called the upgrade the result of “positive changes you see when government leadership is truly working for the people they represent.” (Capitol News Illinois file photo by Jerry Nowicki)

“The upgrade reflects our view of improved liquidity, demonstrated operational controls during the pandemic, and an improved economic condition,” S&P credit analyst Geoff Buswick said in a news release.

The upgrade moved the rating on Illinois’ general obligation bonds to BBB from BBB-, the lowest investment-grade rating available. The state’s long-term credit outlook was rated as stable.

S&P’s decision came one week after Moody’s Investors Service raised its rating to Baa2 from Baa3.

In its announcement, S&P noted that state tax revenues held up stronger than expected during the recession brought on by the pandemic as well as the receipt of federal stimulus money “to help bridge the gap to a fully functioning economy.

It also cited as a reason for the upgrade Gov. J.B. Pritzker’s decision during the pandemic to cut more than $700 million in spending and freezes, though not all of those were related to the state’s general revenue fund.

And it noted that the political gridlock that led to a two-year budget stalemate during former Republican Gov. Bruce Rauner’s term had dissipated.

S&P also said it now views the COVID-19 pandemic as a “social factor” affecting public health and safety, but said the risk is abating “and is not viewed as a material credit factor.”

Like Moody’s, however, S&P said Illinois still faces a number of financial pressures, including its poorly-funded public pension systems and constraints under the state constitution that prevent the state from changing pension benefits.

But S&P also did not rule out the possibility of another credit upgrade in the future if the economy continues to recover and the state continues to manage its budget responsibly.

“The state’s economic base can already support a higher rating,” S&P said. “Any upside to the state’s creditworthiness, however, remains somewhat constrained by the poorly funded pension systems and other outsize liabilities. If Illinois were to make sustainable progress toward structural balance, including meeting its pension obligations, further reducing its bill backlog, and increasing reserves, we could raise the rating.”

Pritzker and other Democratic leaders responded quickly to the news, claiming credit for the state’s improved financial outlook.

“A well-known proverb states, a journey of a thousand miles begins with a single step,” Pritzker said in a statement. “Throughout my administration we’ve remained steadfast in our goal to return Illinois to fiscal stability. That has meant making responsible decisions step by step, day by day, working closely with our partners in state government.”

Senate President Don Harmon, D-Oak Park, called the news “further proof we are on the right track in balancing our fiscal realities with the real-world needs of working men and women,” while House Speaker Emanuel “Chris” Welch, D-Hillside, said it was the result of “positive changes you see when government leadership is truly working for the people they represent.”