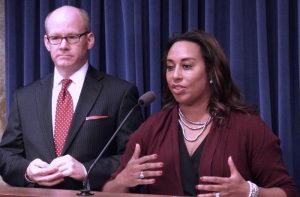 SPRINGFIELD — The Illinois Department of Financial and Professional Regulation, or IDFPR, adopted permanent rules this week to break ties in the application process for 75 conditional adult-use marijuana dispensary licenses.

Under the Cannabis Regulation and Tax Act, firms can score up to 250 points on their application to obtain a license. There are a limited number of licenses available in each of the state’s Bureau of Labor Statistics Regions.

An outside company does the scoring for the applications, and the new rules provide for a randomized tiebreaker process that takes effect if two or more applicants in a given region have a tied score.

Applicants receive points for the strength of their planned security measures as well as floor, record-keeping, business and operating plans, among other factors. Applicants can also receive an added 50 points for qualifying as a social equity applicant.

A firm can achieve social equity status if the majority of its ownership has recently lived in communities disproportionately impacted by poverty, gun violence or the war on drugs. A majority of staff must currently live in such an area or meet other criminal justice related criteria.

Social equity applicants are the only ones that can achieve a perfect 250-point score on their application.

The methodology of the point system is in line with other programs which seek to enact social justice policies to benefit low-income communities disproportionately impacted by the war on drugs and historic disinvestment.

“We are pleased that these rules have been adopted, and we remain unwavering in our commitment to ensuring these licenses are issued in a fair and objective way that implements Illinois’ equity-centric law,” Toi Hutchinson, a senior cannabis advisor to Pritzker, said in a statement.

Of the 75 available licenses, 47 will be given to applicants from the Chicago region. The Metro East area near St. Louis has the next highest number with four.

Conditional adult-use dispensary licenses do not allow the holder to buy or sell marijuana. The licenses only allow them 180 days to find a location to house their dispensary, pass inspection and pay a fee to receive a full license that will entitle them to deal in recreational marijuana.

According to a release distributed by IDFPR Wednesday morning, approval in the legislative committee will allow them to issue conditional licenses “in coming weeks.”

The Illinois Department of Agriculture, which is in charge of awarding licenses that allow firms to grow, infuse and transport cannabis, has yet to finalize its scoring process for firms to apply for and win those licenses.