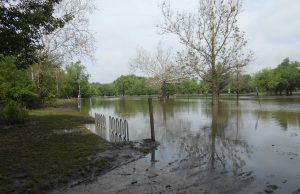 The Illinois Emergency Management Agency (IEMA) and Illinois Department of Natural Resources (IDNR) are reminding water enthusiasts and residents of river communities to stay off Illinois rivers during flood stage, both for their safety and the safety of emergency response personnel.

“We understand that it’s summer and folks are ready to get out and enjoy Illinois’ rivers and waterways, but it’s just not worth the risk when these bodies of water are at flood stage,” said Jerry Costello, director of law enforcement, IDNR. “Even during moderate flooding, our Conservation Police Officers regularly see rapid currents, floating debris and other dangers on Illinois rivers which could easily injure or even lead to the death of those on the water.”

While the IDNR has the authority to close waterways to recreational users due to hazardous conditions, the U.S. Coast Guard also has jurisdiction to close some waterways in Illinois, as well as close Illinois waterways commercially.

“IDNR issues restrictions to recreational use after consulting with local authorities and agencies,” Costello said. “We do so because it’s necessary to protect the safety of both the people who enjoy our waterways and the state and local agencies called upon to rescue those people when the need arises. That’s why, when we issue these restrictions, it’s so important people comply with the notice.”

Currently, IDNR has placed recreational restrictions on the following rivers:

Additionally, the Illinois Emergency Management Agency is urging residents in river communities to stay off levees in the affected areas.  Levees throughout Illinois are overly saturated and are critically unstable.

“Regardless of whether the river has crest, unauthorized individuals are not permitted on a levee,” said Acting IEMA Director Alicia Tate-Nadeau. “Rivers, especially flooded rivers, can be a force of nature.  Please follow instructions of local law enforcement and stay off and away from the levees.”