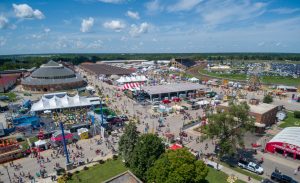 Grow With Us” is the theme of the 2022 Illinois State Fair, which will run from Aug. 11-21 at the State Fairgrounds in Springfield.

The theme’s concept applies not only to Illinois’ status as a top U.S. agricultural producer, but also to ongoing fairgrounds construction projects that will extend the life of many buildings and provide new opportunities for year-round usage of the facility.

This is according to Illinois State Fair Director Rebecca Clark, who referred to a historic $58 million fairgrounds improvement project approved by the Illinois General Assembly that includes building renovations, street upgrades and other infrastructure upgrades. The project, overseen by the Illinois Department of Agriculture, began in June.

“The theme is quite indicative of everything you see on the grounds today. We recently received a real shot in the arm for infrastructure improvements, so we’ve got nice, paved roads, newly repaired roofs, and work will begin again on the Coliseum after the fair. We’re also undergoing some important improvements to the Multi-Purpose Arena. We really feel like we’re growing and improving,” said Clark.

The $8.6 million effort to improve the 261,000-square-foot Multi-Purpose Arena will repair sidewalks, walls, steps, expansion joints and electrical systems. A readjustment of the tension structure, installation of a new canopy and strengthening of retaining walls will also be required. The Multi-Purpose Arena, set on six acres of the Illinois State Fairgrounds, will be closed during the 2022 Illinois State Fair. As a result, the ITPA truck and tractor pulls and demolition derby will be canceled until 2023.

According to IDOA Director Jerry Costello, the new construction project builds on investments made in 2019 to improve the facade of the Coliseum (which is home of the annual Governor’s Sale of Champions and equestrian events) along with improvements to other structures on the fairgrounds.

“For the past three years, this administration has been committed, and continues to be committed, to improving the Illinois State Fairgrounds,” said Costello. “Starting with the crown jewel, the Coliseum, and expanding across the grounds, the work that is being done today will ensure our fairgrounds will be here for many years to come.” 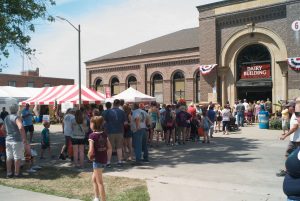 Along with no increase to gate prices, state fair organizers have worked to keep good prices down. (Photo courtesy of Illinois State Fair)

The $58 million investment is being administered by the Illinois Capital Development Board, which deemed the upgrades critical for keeping buildings sustainable and accessible for all visitors to the fairgrounds. The renovation project is expected to re-define the purpose of the Springfield fairgrounds as a multi-use facility that will benefit residents year-round, according to Clark. “We’re excited to be partnering with the Community Foundation of the Land of Lincoln for a master plan for making sure we have an eye on the future not just during the 11 days of the fair, but the whole year. The work being done to improve our fairgrounds is enabling us to use the grounds for more events year-round, which helps bring in tourism for Springfield and our surrounding area,” she said.

The last economic impact study of the Illinois State Fair in Springfield, completed in 2013, showed that the fair generated $86 million in business volume, of which $35 million went to wages and salaries. However, the fair’s true economic impact is hard to determine, its director noted.

“The state fair puts people to work and puts money in people’s pockets,” Clark said. “We hire hundreds of temporary seasonal workers — in fact we’re still hiring — and those employees go out and spend money at gas stations, grocery stores and restaurants. This continues the trickle-down effect of the fair in Springfield, Sangamon County and neighboring counties as well.”

The state fair will generate $2 million to $5 million in yearly sales tax revenue depending on how the weather affects attendance, according to Clark.

“A lot of people focus on how many people attended the fair,” said Clark. “I really think that’s the wrong emphasis to be looking at. How much money did we generate for our communities? How many volunteer organizations used the fair as a fundraiser? How many businesses are benefiting from people who come to town to go to the fair?”

Clark added that fair planners are striving to keep the cost of attending the fair reasonable for those affected by current economic inflation.

“We’re very cognizant of holding the line on our prices,” Clark said. “There are no gate price increases at the gate, and adults are half-price Monday through Thursday. Kids are free every day of the fair. There is no increase in the cost to park and no increase in the price of a mega-pass. It’s really important that we do everything we can to remain a family friendly, affordable event.”

“We’ve also gone proactive on keeping food prices down. We have a Feeding Frenzy program every day from 2-5 p.m. when vendors will have discounted food prices. We also created a new Small Plates, Big Taste event to take place in the Village of Cultures. Each vendor will have smaller portions from their menu available for $3, making it possible to sample your way around the world. This will be available all day, every day.”

Work on the State Fairgrounds is expected to continue into 2023, according to an Illinois e-News release. For a complete overview of 2022 Illinois State Fair events, including daily admission and parking rates, grandstand and harness racing schedule, free admission days and more, visit www2.illinois.gov/statefair/info/Pages/Default.aspx.