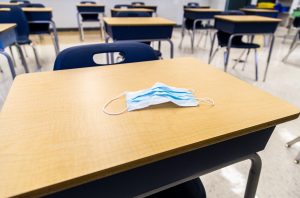 The appeal comes just days before Gov. J.B. Pritzker’s administration is scheduled to lift the statewide indoor mask mandate Feb. 28 for most public places, except in schools and health care settings.

SPRINGFIELD – The Illinois Supreme Court is being asked to review the state’s mask mandate and other COVID-19 mitigation orders for K-12 schools on an expedited schedule.

Attorney General Kwame Raoul filed a petition for appeal Tuesday, Feb, 22 along with a motion for an emergency stay of a Sangamon County judge’s order to block enforcement of the rules.

On Feb. 4, Sangamon County Circuit Judge Raylene Grischow issued a temporary restraining order blocking enforcement of the rules which, among other things, require schools to exclude students or staff from their buildings if they have been in close contact with someone who has COVID-19, and require unvaccinated staff to undergo testing at least once a week.

In her ruling, Grischow cited a section of the Illinois Department of Public Health Act that says people may not be quarantined without their consent or a court order and concluded that the mitigation mandates amounted to a kind of quarantine.

Two weeks later, a three-judge panel of the 4th District Court of Appeals declined to review that decision, saying the issue was “moot” because, in the intervening time, the legislature’s Joint Committee on Administrative Rules voted not to extend the Illinois Department of Public Health’s emergency rules that put those mandates in place.

The appeal comes just days before Gov. J.B. Pritzker’s administration is scheduled to lift the statewide indoor mask mandate Feb. 28 for most public places, except in schools and health care settings. Pritzker has said he intends to lift the school mandate as well, possibly within the next few weeks, saying schools need more time because of the large number of unvaccinated children in the buildings and the close proximity in which they work.

Asked Wednesday why the administration continues to appeal the case, Pritzker said he thinks it’s important to clarify the powers of the governor and state agencies in case of another public health emergency.

“This really is about what do we do in the next emergency, as much as anything, what happens when there is another omicron wave or, God forbid, at some future date, another pandemic or some other major emergency that affects everybody in the state,” Pritzker said during an unrelated news conference in Decatur. “We want to be able to do the right thing for the people across the state and so we hope that the Supreme Court will see that and rule on that despite the decision by the appellate court.”

In his appeal, Raoul’s office also argued that there needs to be clarity because different appellate courts have ruled differently on the same question.

In 2020, the 2nd District Court of Appeals in Kane County ruled against the owners of FoxFire Tavern in Geneva and upheld Pritzker’s indoor mask mandate for bars and restaurants. In that ruling, the court specifically found that the orders “were not tantamount to quarantine orders, isolation orders, or business-closure orders,” and that the governor’s actions were authorized under the Illinois Emergency Management Act.

“As a result, the (Sangamon County) circuit court’s order has infused confusion into an area of law that was settled and holds the governor to a standard not required by statute,” Raoul’s office stated in the appeal.

In its motion to stay the Sangamon County restraining order, Raoul’s office said the order is creating confusion for entire communities.

“Today, parents, teachers, school staff, and members of their communities are faced with impossible choices,” the motion states. “Some schools have eliminated mitigation measures on the threat of legal liability, some parents have been forced to withdraw students from school, and uncertainty regarding the applicable legal regime reigns. This court should stay the circuit court’s (temporary restraining order) during the pendency of these proceedings and restore the status quo.”

The state is asking for a schedule that would allow for oral arguments as soon as the week of March 20.