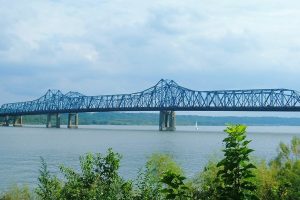 Work is moving forward on the $167 million eastbound McCluggage replacement in Peoria. This bridge is anticipated to open in early 2024. (Photo courtesy of IDOT)

The Illinois Department of Transportation (IDOT) delivered projects across the state during 2022.

As of Sept. 30, Rebuild Illinois has made $9.6 billion in improvements statewide on 4,546 miles of highway, 422 bridges, and 645 additional safety improvements, ranging from routine maintenance projects to extensive interstate and bridge reconstructions.

The past year marked the completion of the third full year of Gov. J.B. Pritzker’s Rebuild Illinois plan, the capital program that is investing $44.8 billion into the state’s infrastructure over six years, with $33.2 billion identified for transportation.

Rebuild Illinois is the largest capital program in state history but the first that touches all modes of Illinois transportation: roads and bridges, transit, waterways, freight and passenger rail, aviation, and bicycle and pedestrian accommodations.

One of the biggest, most complex projects in state history was declared substantially complete when all lanes and ramps on the new, improved Jane Byrne Interchange opened this month. The $806 million project revamped the junction of Interstate 90/94, Interstate 290 and Ida B. Wells Drive in Chicago with several capacity and safety improvements, as well as enhanced access to bike, pedestrian, and transit options.

A new Interstate 57/74 interchange is taking shape in Champaign-Urbana as the $216.8 million Rebuild Illinois cornerstone focuses on building two flyover bridges central to the project. With anticipated completion in 2025, the updates will modernize an outdated cloverleaf interchange, while improving safety and mobility at a major freight juncture.

Work is moving forward on the $167 million eastbound McClugage Bridge replacement in Peoria, highlighted by a 650-foot-long, 130-foot-tall arch that will be moved by crane into its final position next summer. This bridge is anticipated to open in early 2024.

Federal approval was received in 2022 on another major piece of Rebuild Illinois: the $1.2 billion reconstruction of 16 miles of Interstate 80 in Will County. While the replacement of bridges east of the Des Plaines River continues, the section from Ridge Road to the DuPage River will be under construction in 2023.

Also in Will County, the state’s fourth diverging-diamond interchange opened at Weber Road and Interstate 55 in November. By routing vehicles to the opposite side of Weber Road and eliminating left turns across traffic, the design helps decrease crashes and improve pedestrian and bicycle access across I-55.

A major investment in Interstate 57 unfolded this construction season, as 38 miles of roads and bridges in Cook, Will, Kankakee, Iroquois, and Ford counties were improved. In southern Illinois, work included replacing bridges in Jefferson County and adding lanes in Franklin County. The total combined cost is $477.2 million, with the ongoing effort to make I-57 six lanes from Interstate 24 south of Marion to Mt. Vernon a focal point.

The resurfacing of the entire length of I-24 in Illinois passed a milestone with the completion of a $28 million pavement patching, resurfacing and bridge repair on the two miles approaching the Ohio River this fall. 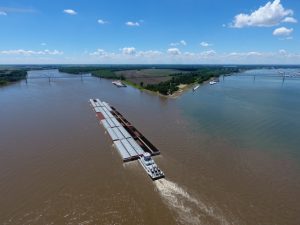 The Pritzker administration has committed $108 million through the capital program to invest in 12 public port projects that advance the Illinois Marine Transportation System Plan. (Photo courtesy of IDOT)

The state of rail

In October, Pritzker broke ground on the Forest Hill Flyover and 71st Street grade separation, part of the 75th Street Corridor Improvement Project to help eliminate the most congested rail bottleneck in the Chicago area — the largest piece of the Chicago Region Environmental and Transportation Efficiency Program.

Another CREATE project advanced in 2022, with IDOT receiving a $70 million federal grant for the Ogden Junction. The project will rehabilitate, replace, remove, and upgrade nearly two miles of track, signaling and viaduct structures, as well as build 10,000 feet of new track.

In the Metro East area, a $10.1 million project to modernize rail operations, improve safety and enhance the mobility of goods, people and services was declared finished in October with the replacement of the Lenox Tower. The project, a joint federal and state effort with several railroads, reconfigured an outdated network of tracks and signals while modernizing operations.

The past year saw a new schedule implemented for Amtrak Lincoln Service trains, reflecting 90 mph speeds as a result of improvements made along the Chicago-St. Louis corridor. Work continues toward the ultimate goal of increasing speeds to 110 mph in 2023. New Siemens Venture passenger rail cars entered service in early 2022 in Illinois and other Midwest states, with continued delivery and rollout of more Venture cars to follow in 2023. 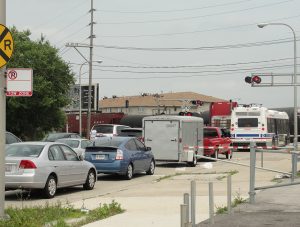 The Chicago Region Environmental and Transportation Efficiency Program is a multifaceted project across the metro area. One component involves reducing roadway congestion and improve safety at the 65th Street grade crossing in Chicago, a location that is designated a “911 Critical Crossing” by IDOT and safety agencies. (Photo courtesy of IDOT)

Downstate transit providers were awarded nearly $111 million through a competitive application process via Rebuild Illinois to build bus shelters, stations, and maintenance facilities that will expand and improve service, provide more transportation options in communities, and enhance quality of life.

All told, Rebuild Illinois provides $4.5 billion to improve transit service throughout Illinois, the most spent on transit in any state capital program since 1968.

Plans to establish a new inland port in Cairo were furthered with the release of $3.4 million through Rebuild Illinois, part of a more than $40 million commitment to the Alexander Cairo Port District to help complete environmental requirements and studies for the project, one of the largest investments in southern Illinois in decades.

In addition, $108 million through the capital program was invested in 12 public ports for projects that advance the Illinois Marine Transportation System Plan, which prioritizes asset management performance-based decisions and improvements that benefit disadvantaged or economically distressed areas.

In November, IDOT celebrated the opening of a new air traffic control tower at Lewis University Airport, an $8 million project supported by $6 million from Rebuild Illinois.

Pritzker and IDOT announced the sixth and final round of $250 million in Rebuild Illinois grants to advance municipal, township, and county projects across the state. In all, $1.5 billion has been distributed by IDOT to address local transportation needs in 2,856 communities, municipalities, and townships.

The Safe Routes to School program provided $12.3 million in grants to 57 projects selected from 102 applications submitted by municipalities and schools across the state. Administered by IDOT using federal funds, Safe Routes to School supports projects and activities that improve safety and encourage active transportation options in areas around elementary and middle schools.