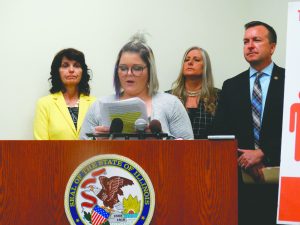 Megan Blair, a 27-year-old diabetes patient from Harristown, talks about her struggle to keep up with the rising cost of insulin during a news conference Tuesday in Springfield. Democratic State Reps. Sue Scherer (from left) and Stefanie Kifowit and Sen. Andy Manar are among the sponsors of a bill that would cap out-of-pocket costs for insulin at $100 for a 30-day supply. The bill could be considered during the veto session which begins Oct. 28. (Photo by Peter Hancock/Capitol News Illinois)

“I remember standing at the pharmacy counter with my mom,” she said. “When the pharmacist rang up the prescription, he let us know that the 30-day supply of insulin that I needed would be about $800. I looked at my mom and my mom looked at me.”

Blair, who is now 27 and lives in Harristown, about eight miles west of Decatur, is one of an estimated 1.3 million people in Illinois coping with diabetes, as well as the high cost of keeping it under control.

“Come to find out that the fact that I was diagnosed as a Type 1 insulin-dependent person wouldn’t be the hardest battle I would have to face the rest of my life,” she said. “Trying to make a living, have a family and learn how to come up with $800 a month on insulin to keep me alive would actually be the biggest challenge of my life.”

Blair spoke Tuesday at a news conference in Springfield surrounded by Democratic state lawmakers who are pushing for a bill that would bring down the out-of-pocket cost for insulin for many, but not all, diabetes patients in Illinois.

“The cost of insulin clearly is breaking families that we represent,” said state Sen. Andy Manar (D-Bunker Hill), one of the main sponsors of a bill that would cap the out-of-pocket cost of insulin at $100 for a 30-day supply.

“Ultimately what has to happen is our Congress and our president have to act on the runaway cost of pharmaceutical drugs,” Manar said. “Senate Bill 667 (Amendment 1), we hope, addresses an issue immediately in Illinois and serves as a stepping stone to a larger reform.”

Manar and fellow-Democrat Rep. Will Guzzardi, of Chicago, introduced the language of the bill in late May, and they hope to see it passed during the upcoming veto session that begins Oct. 28.

The bill comes on the heels of unsuccessful attempts during the regular spring session to impose even tighter controls on the cost of prescription drugs across the board in Illinois, proposals that met stiff opposition from the pharmaceutical industry.

The new bill, Manar said, focuses exclusively on insulin because of the scope of the problem and the number of people it affects.

Citing figures from the Health Care Cost Institute, Manar said the average price of insulin in the United States nearly doubled between 2012 and 2016, rising to 25 cents per unit. For someone using an average amount of 60 units per day, that translates to an increase from $7.80 a day to $15 a day.

That’s a significantly higher cost than what people in other countries pay for the same drug. Manar noted that a single vial of one common form of insulin, Humalog, costs $20 in Japan and $31.60 in Canada. But in the United States, it costs $135.50, in large part because drug costs are subsidized in countries that have national health insurance systems.

“Insulin isn’t optional,” said Rep. Sue Scherer (D-Decatur). “It’s life-or-death for people, and it is so totally unfair that people are having to choose between insulin and food for themselves or their family.”

Blair said she is among many diabetes patients who routinely ration their insulin doses, taking less than the recommended dose, in order to stretch out their supply, something that often results in subsequent hospitalization.

“And not just the easy trip to the emergency room,” she said. “It usually ended up with a two- or three-day stay in the (intensive care unit).”

Leroy Jordan, 77, of Springfield, said he also struggles with the cost of insulin to treat his Type 1 diabetes. He said he was a grown adult when he was diagnosed with Type 1 diabetes, also known as juvenile, or insulin-dependent diabetes, a form of the disease that usually appears during childhood but which can develop later in life.

“This cost thing is just terrible,” he said. “When youngsters are born with diabetes, we that have it later in life kind of say, ‘Oh boy, I’m very fortunate.’ But it’s killing us too.”

Senate Bill 667 would not lower the cost of insulin for all patients in Illinois. It would apply only to those on publicly-funded health plans — primarily Medicare, Medicaid and the state employee health plan. Supporters of the bill were not immediately able to say how many people that would cover, but it would not cover people on private employer-based health plans because those are regulated under federal law.

In a statement, Tiffany Haverly, spokesperson for the Pharmaceutical Research and Manufacturers of America, a group that lobbies for the pharmaceutical industry, did not comment specifically on the bill. But she said the industry sympathizes with patients struggling to afford their medications and that support is available in the form of discounts and rebates to those who cannot afford their drugs.

“In addition to supporting commonsense solutions to lower Illinoisans’ out-of-pocket costs, PhRMA recently launched a new tool — the Medicine Assistance Tool, or MAT — to connect eligible patients with over 900 public and private assistance programs,” she said. “We encourage any patient struggling to afford their medicines to visit mat.org to see what resources might be available to them.”