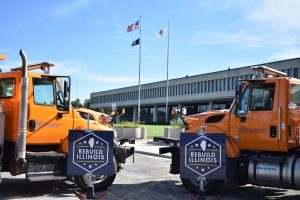 The highway portion of the multi-year plan makes up $24.6 billion of the planned spending. Of that, $13.3 billion, or 54 percent, is federally funded, just over $6 billion is state funding, $4.1 billion comes from bond proceeds, and $1.2 billion comes from local reimbursements. (Photo courtesy of IDOT)

It’s the latest multi-year plan backed by the state’s 2019 Rebuild Illinois bipartisan infrastructure law, which doubled the state’s motor fuel tax from 19 to 38 cents per gallon and scheduled it to grow with the rate of inflation. That measure also increased driving-related fees, redirected a portion of the state’s sales tax on motor fuel to the road fund and authorized borrowing to pay for construction projects.

“A little over three years ago, I signed our historic bipartisan infrastructure program into law,” Gov. J.B. Pritzker said at a news conference at the IDOT building in Springfield. “And since then, Rebuild Illinois has undertaken a massive transformation of our state’s transportation systems.”

Approximately $8.6 billion has already been spent in the first three years of the Rebuild Illinois plan on road and bridge projects, including over $6.4 billion on the state transportation system and over $2.1 billion on local systems.

It’s a slower pace than laid out in the six-year $33.2 billion spending plan passed in 2019. But IDOT Secretary Omer Osman said he’s hopeful that the pace picks up as several large projects move beyond the initial engineering phase.

IDOT has expanded its engineering staff and lawmakers approved a “design-build” process in Senate Bill 2981 this year to combine the design and construction in a more efficient bidding process, which could also hasten things, he said.

“We are aggressively, aggressively pushing all these projects across the entire state,” he said. 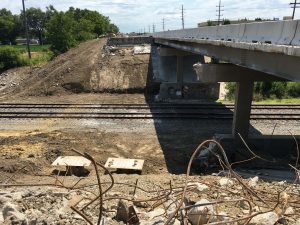 Approximately $8.6 billion has already been spent in the first three years of the Rebuild Illinois plan on road and bridge projects. (Photo courtesy of IDOT)

The highway portion of the multi-year plan – a required filing each year for the state’s transportation agency — accounts for $24.6 billion of the planned spending. Of that, $13.3 billion, or 54 percent, is federally funded, just over $6 billion is state funding, $4.1 billion comes from bond proceeds, and $1.2 billion comes from local reimbursements.

The current fiscal year, which began July 1, is scheduled to see $3.7 billion in new construction under the road and bridge plan.

Another near-$10 billion in combined state, federal, local and private spending was laid out for transit, marine transportation, railways and airports. Of that, 59 percent was state spending and 31 percent federal.

Projects in that plan range from construction of high-speed rail between St. Louis and Chicago to airport upgrades to support for major port renovations at the confluence of the Mississippi and Ohio rivers near Cairo in southern Illinois.

Road projects are underway in all nine of the state’s IDOT districts, from a $54 million interchange reconstruction, bridge replacement and repair on Interstate 80 in Will County, to $100.3 million for improvements on Interstate 24 from Metropolis to Interstate 57 in Massac, Johnson and Williamson counties.

“The renovation of nearly 4,500 miles of highway and over 400 bridges has already been completed, and virtually every Illinois resident can see and feel the results in real time,” Pritzker said. 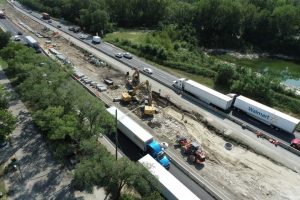 Road projects are underway in all nine of the state’s IDOT districts, including a $54 million interchange reconstruction, bridge replacement and repair on Interstate 80. (Photo courtesy of IDOT)

The fact that Illinois had an infrastructure plan when the federal law passed, Pritzker said, made the state better equipped to take advantage of federal matching funding, which provides for an 80 percent federal match for a state’s investment of 20 percent of certain projects’ costs.

“Because we passed rebuild Illinois two-and-a-half years before the (federal law) was passed, we actually are shovel ready, we have the resources available,” Pritzker said. “There are a lot of other states that have to come up with those dollars, don’t know where they’re going to come from. And so we’re really in a position to do much more, much more quickly.”

Lawmakers from both parties hailed it as forward-thinking for its automatic motor fuel tax increase, raised registration rates for electric vehicles, and the authorization of bonding to pay for construction.

One lawmaker voting against all three portions of the plan was then-Rep. Darren Bailey, the Xenia Republican and current state senator who is challenging Pritzker in the 2022 governor’s race. 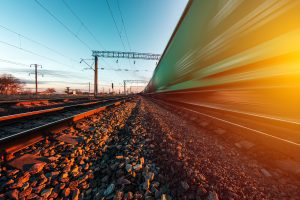 Projects in the transportation infrastructure plan include construction of high-speed rail between St. Louis and Chicago.

Bailey has frequently criticized the motor fuel tax increase, successfully using it as an avenue of attack against challengers in the Republican primary. But he hasn’t offered up an infrastructure funding plan of his own.

Asked for comment on the infrastructure plan and potential alternatives Friday, Bailey’s team issued a statement.

“JB Prtizker’s gas tax hike gave Illinois the second-highest gas tax in the country, and some of the highest gas prices. It is simply not affordable,” spokesperson Joe DeBose said in a statement. “48 states are able to build their transportation infrastructure with lower gas taxes than Illinois. We can do better with zero-based budgeting and reprioritizing spending, but not with J.B. Pritzker in charge.”

Osman, who has worked at IDOT for more than 30 years and became its director under Pritzker, said the motor fuel tax increase means infrastructure improvements can continue beyond Rebuild Illinois’ initial six-year lifespan.

“We are number three in the nation when it comes to interstate land mileage, and that’s a big statement to make,” he said. “Our system is complex, and we need that sustainable funding as we go down the road beyond the six years, for sure.”