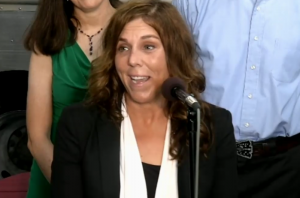 Melissa Hallbeck talks about being able to replace an opioid with medical marijuana for pain management. “I needed opioids every day,” Hallbeck said of her severe stomach pain. (Photos from BlueRoomStream.com)

Melissa Hallbeck loves being active again with her 6-year-old son.

Suffering from severe stomach pain caused by the disease anisakidosis, Hallbeck had been taking four Norco, an opioid, a day for two years to manage the pain.

She learned about medical marijuana as an alternative about a year ago and decided to give it a try.

“I make my own topical cannabis oil that has no psychoactive effect to it whatsoever when I put it on,” Hallbeck said.

The switch has been noteworthy, she said.

“It’s made all the difference in the world,” Hallbeck said. “I’ve gotten my life back.”

Besides being able to play with her son, Hallbeck said, the switch to medical marijuana has allowed her to do all the activities she used to do and put herself through school on academic scholarships.

Hallbeck said after multiple surgeries she started taking pain medication and increased the dosage as the pain got worse.

“I needed opioids every day,” she said of taking 10 milligrams of Norco daily.

Legislation signed into law by Gov. Bruce Rauner aims to provide more people like Hallbeck access to medical alternatives to opioids as a means to combat the opioid crisis. Illinois is the first state in the nation to enact such a measure.

State Rep. Kelly Cassidy (D-Chicago) and state Sen. Don Harmon (D-Oak Park) sponsored the legislation, which creates a pilot program allowing individuals over the age of 21 with any condition for which opioids might be prescribed to apply for temporary access to the state’s medical marijuana program.

“The opioid crisis is getting worse at an alarming rate,” Harmon said. “People dealing with severe pain and other medical conditions are looking for relief, and it is becoming increasingly clear that opioids may not be the safest treatment. We must be open to any reasonable alternative, and I am thankful for the support I received on both sides of the aisle for this legislation, and to the governor for signing it into law.”

Data from the U.S. Centers for Disease Control shows that opioid deaths are on the rise nationwide, with an estimated 72,000 people dying of an opioid-related overdose in 2017, including a 10 percent increase in deaths in Illinois. 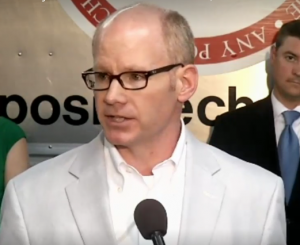 State Sen. Don Harmon (D-Oak Park) talks about legislation he sponsored which allows people prescribed an opioid to take medical marijuana instead as part of a pilot program. The legislation was signed into law by Gov. Bruce Rauner on Aug. 28.

Under the program, patients will obtain a physician’s certification that they have a condition for which an opioid could be prescribed. They may then take that to a dispensary to receive medical cannabis for a fixed period of time.

“Studies show that opioid dependence can develop with a week or even a few days of use,” Harmon said. “This law gives people a chance to act quickly and pursue another treatment if they choose.”

“I applaud the governor for supporting this bipartisan legislation that creates a pilot program which allows physician-certified patients to use medical marijuana instead of using prescribed opioids that could be potentially harmful and life-threatening,” said state Sen. Chris Nybo (R-Elmhurst), who sponsored an amendment which got more Republicans to sign on to the meausre.

The legislation got overwhelming support when it passed both state chambers in April.

“(Senate Bill) 366 is a sincere bipartisan effort to address the opioid crisis in our country,” Nybo said. “If a patient has been prescribed an opioid, by allowing them to use medical marijuana, under the direction of a doctor, we are giving them a safer alternative to treat pain.

“In Illinois, more people died last year from opioid overdoses than fatal car accidents. We have to address this dangerous epidemic.”

Nybo said that seriously ill patients should not be pushed toward some of the most harmful drugs available, particularly when there is a safer alternative.

“Studies in recent years have supported what many medical marijuana patients already know: medical cannabis can be an effective alternative for patients who might otherwise rely on opioid drugs,” Nybo said. “SB 366 would not only provide that alternative, it would also make other critically important improvements to the state program, including removing the current fingerprint requirement for all patients.”

There are 29,900 individuals who have received approval from the state to use medical marijuana. Since the medical cannabis pilot program began in 2015, approved dispensaries have sold more than $123 million in products.

The number of opioid prescriptions in Illinois has fallen by 9.8 percent between 2013 and 2017, according to the Illinois Department of Public Health. In 2016, 3 million Illinois residents received a prescription for an opioid.