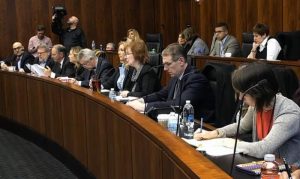 A joint education committee of the Illinois House and Senate began discussions Tuesday in Springfield of what action the state can take to counteract the overuse of physical restraint and forced isolation of students in Illinois schools, particularly those serving students with special needs. (BlueRoomStream.com)

SPRINGFIELD — Legislators and advocates began discussions Jan. 7 of what action the state can take to counteract the overuse of physical restraint and forced isolation of students in Illinois schools, particularly those serving students with special needs.

At a joint Illinois Senate and House committee hearing in Chicago, several of those who spoke credited revelations unearthed by a Chicago Tribune and ProPublica investigation published in November for the increased interest in the topic.

That investigation showed there were more than 20,000 documented incidents of isolation used in the state from the start of the 2017-2018 school year through December 2018.

“The students, most of them with disabilities, scratch the windows or tear at the padded walls. They throw their bodies against locked doors. They wet their pants. Some children spend hours inside these rooms, missing class time. Through it all, adults stay outside the door, writing down what happens,” according to the report.

In Illinois, it is legal to isolate students if they pose a safety threat to themselves or others, the report found, but the practice is used far more than in such situations.

“Children were sent to isolation after refusing to do classwork, for swearing, for spilling milk, for throwing Legos. School employees use isolated timeout for convenience, out of frustration or as punishment, sometimes referring to it as ‘serving time,’” according to the report.

The report also found that while schools must document isolation instances, that documentation often goes unread, and the Illinois State Board of Education had not collected any data on the practice at the time the article was published.

The investigation prompted ISBE to initiate emergency rules banning the use of isolated seclusion in “any educational entity serving public school students in Illinois” in November.  A news release at the time said ISBE would begin collecting data to “increase accountability and transparency for all instances of timeout and physical restraint.” The board proposed permanent rules in December.

At the committee hearing Tuesday, Amanda Elliott, co-director of legislative affairs at ISBE, said the emergency rules allowed ISBE to collect data on the use of seclusion and restraint in prior years. She said ISBE is reviewing the data for violations which would prompt investigations and potential disciplinary action. She said nine investigations are pending as a result.

She said sanctions resulting from violations could result in licensure suspension, professional development requirements or even criminal charges for individuals. For schools, recognition status could be affected, which would impact funding, she said.

Rep. Fred Crespo (D-Hoffman Estates), however, questioned how schools are self-reporting that data and suggested it would likely be incomplete.

Advocates at the meeting urged greater oversight from ISBE, increased training requirements and opportunities for school staffs, and greater resources for providing an adequate number of staff, particularly social workers.

“We hear these devastating stories and then we come here to take action and it’s the same three things that we need, though. We need training, we need oversight and we need resources to help our teachers,” said state Sen. Jennifer Bertino-Tarrant, a Shorewood Democrat and chair of the Senate Education Committee.

Illinois Federation of Teachers President Daniel Montgomery said “unless there is a real sea change” of how educators are trained, change will be difficult to implement. He said a simple 8-hour course would be nowhere near sufficient, and he urged “systemic, sustained” training requirements.

Other stakeholders pointed out that the isolation room practices documented in the investigation were already illegal, but there were no enforcement mechanisms in place to punish school districts for using them.

Rep. Sue Scherer, a Democrat from Decatur, said the state would have to make a “firm commitment to funding of these training programs” in order to effect change. Otherwise, without training, she said, the state is “basically throwing teachers to the wolves.”

Advocates also agreed policy changes were not aimed at “support” or “de-escalation” rooms where students with sensory issues can willfully go with social workers or support staff.

Rep. Jonathan Carroll, a Northbrook Democrat, is sponsoring a bill to ban the practice of “seclusion,” which is defined as “a discipline management practice or behavior management technique in which a student is confined in an enclosed space that is designed solely to seclude a person, regardless of space or dimension, whether it is a box, a closet, a room, or any other specially designated locked or unlocked space.”

He said the matter was personal to him, as he said he was physically restrained and placed in such a room as a child.