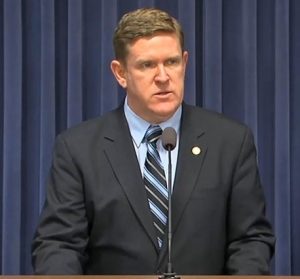 Illinois State Police Director Brendan Kelly is pictured at the Illinois State Capitol in February 2020. He is named in a lawsuit regarding delays in the issuance of Concealed Carry Licenses. (Blueroomstream.com)

SPRINGFIELD — Four Illinois residents who have been waiting for months for their state-issued Concealed Carry Licenses are suing officials with the Illinois State Police for allegedly depriving them of their right to bear arms and right to due process.

The lawsuit, filed March 5 by the four individuals as well as the Illinois State Rifle Association and the gun-rights group Second Amendment Foundation, claims the state’s concealed carry law is unconstitutional.

The law requires that an individual obtain a Concealed Carry License from the state before he or she is able to carry a firearm concealed.

“But despite this statutory command, the ISP commonly does not approve qualified residents’ CCL applications within 90 or 120 days,” the lawsuit claims. “Instead, the ISP leaves applicants in limbo for months, with residents commonly waiting many additional months to receive a CCL. That has been true for some time, and it has only become worse as applications for CCLs have surged in the past twelve months.”

“Illinois cannot justify completely and indefinitely denying its residents their fundamental Second Amendment right to carry a functional concealed firearm in public to defend their lives and families while they wait for the ISP to approve their CCL applications,” the lawsuit states.

The lawsuit asks the federal court to find that ISP’s failure to issue CCLs to qualified applicants within the required 90 or 120 days violates the Second and 14th Amendments.

It also asks the court to either order the state to immediately issue CCLs or immediately process the CCL applications for the four individuals named in the lawsuit and for members of ISRA and SAF who applied for CCLs more than the required 90 or 120 days ago, who have not had their applications approved or denied.

“It was hoped that litigation could be avoided but these delays simply are unacceptable and there does not seem to be anything to suggest that the delays will end any time soon,” ISRA Executive Director Richard Pearson said in a news release.

The lawsuit is against ISP Director Brendan Kelly and ISP Firearms Services Bureau Chief Jarod Ingebrigtsen, in their official capacities.

An ISP spokesperson said the agency does not comment on pending litigation.

In December, Kelly called the delays “unacceptable” in a news release. At that time, ISP estimated the average processing time as 145 days for new CCL applications.

ISP has sought to address the backlog and delays by hiring 21 Firearms Eligibility Analysts since March 2020, and adding 19 temporary contracted employees to the Firearms Services Bureau, the agency reported in December.

In the Bradley case, the two gun rights groups argue that individuals who apply for FOID cards face delays that exceed the 30-day requirement under the law.

In the Thomas case, the groups claim that the delays faced by individuals seeking to appeal the denial of their FOID card applications or the revocation of their card are infringing on their right to bear arms under the Second Amendment and right to due process under the 14th Amendment.

Those cases are still pending in federal district court in Chicago.