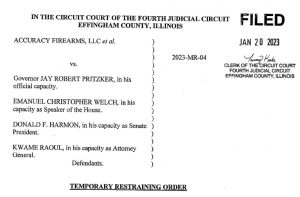 Raoul’s office filed the petition in the 5th District Appellate Court in southern Illinois, arguing that Effingham County Judge Josh Morrison had abused his discretion and the plaintiffs are unlikely to succeed in their lawsuit, thus the restraining order was granted incorrectly.

Morrison’s late Friday order applies to only the 800-plus plaintiffs in the case filed by Tom DeVore, the unsuccessful 2022 GOP candidate for attorney general.

“Although disappointing, it is the initial result we’ve seen in many cases brought by plaintiffs whose goal is to advance ideology over public safety,” Pritzker said in a statement shortly after the order was announced.

“We passed the Protect Illinois Communities Act to get dangerous weapons off the street and create a safer state,” Harmon said in a statement. “This ruling will be appealed. We look forward to our day in court to zealously advocate for our neighbors who are weary of the gun violence epidemic.”

But the Illinois State Rifle Association, which has filed a separate challenge to the law in federal court, applauded Morrison’s ruling, saying the ruling is “a clear indication” that Pritzker and lawmakers “rammed this law through improperly.”

In his Jan. 20 ruling, Morrison sided with the plaintiffs’ argument that there were legitimate issues about whether the law violates their rights to due process and equal protection because it limits most people’s Second Amendment right to keep and bear certain firearms, while at the same time exempting some groups of people from the law but not others. 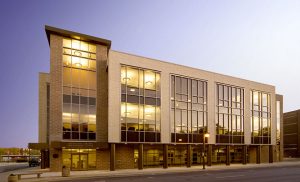 But Morrison also devoted much of the opinion to the procedural shortcuts lawmakers used to pass the bill — shortcuts routinely used in order to pass legislation quickly, especially when the General Assembly is facing statutory or constitutional deadlines.

In this case, the law’s underlying bill, House Bill 5471, passed through both chambers in its final form during the final two days of the legislature’s “lame duck” session earlier this month, with Pritzker signing the bill the night of Jan. 10.  At noon the next day, Jan. 11, newly-elected lawmakers were sworn in and a new biennial session began, meaning the process would have had to start over after that point.

A House committee held multiple hearings on the bill in December, but at that time the draft language of the bill was contained in HB5855.

The Illinois Constitution requires that bills be read by title into the record on three different days in each chamber, a process that would normally take at least five days to complete. But at the tail end of the lame duck session, lawmakers didn’t have that much time, so engaged in a commonly-used maneuver known as “gut and replace.”

That means the Senate took a bill that had already passed the House — in this case, one amending a portion of the state’s Insurance Code dealing with public adjusters — gutted it of all its content and replaced that content with the language of the assault weapons ban. Then they sent the “amended” bill back to the House for an up-or-down concurrence vote.

“This Court finds that the Defendants unequivocally and egregiously violated the Three Readings Rule of the Illinois Constitution in order to circumvent the Constitutional requirements and avoid public discourse,” Morrison wrote.

Morrison also said he believes the legislation violates the Constitution’s requirement that bills be limited to only one subject, unless they deal with appropriations, codification, revision or rearrangement of laws. He said the assault weapon bill violates that provision because it contains provisions that also relate to human trafficking and drug trafficking.

The Illinois Supreme Court, however, has historically declined to strike down legislation based on either of those two arguments, ruling repeatedly that if the speaker of the House and president of the Senate both certify that a bill was properly passed, the court  would not second-guess that decision.

Morrison was just elected as a 4th Circuit judge in November. Prior to that, he had been the state’s attorney in Fayette County and was among a group of state’s attorneys who sued the state to challenge the constitutionality of the sweeping criminal justice reform law passed in 2021 known as the SAFE-T Act.

In 2020, during the height of the COVID-19 pandemic, Morrison also wrote to Attorney General Kwame Raoul to question the enforceability of Pritzker’s emergency orders at the time. DeVore later cited that letter as part of his 2022 campaign for attorney general.